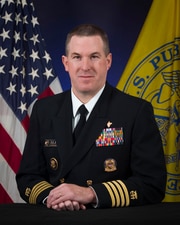 Chief of Staff
HHS Office of the Secretary
Captain Joel Dulaigh is Chief of Staff to the United States Surgeon General, Vice Admiral Jerome Adams. An acute care nurse practitioner and a member of the United States Public Health Service Commissioned Corps, CAPT Dulaigh has served more than 30 years in the uniformed services.
Captain Dulaigh joined the Army National Guard in 1988, before accepting a commission as a nurse officer in the United States Navy in 1995. After his first assignment at Naval Medical Center in Portsmouth, VA, he received his nurse practitioner’s degree from the University of Texas – Houston Health Science Center, and then was assigned to Naval Hospital Guam.  After that, he served as a nurse with the White House Medical Unit from 2002 – 2005.  He then transferred to the Naval Reserve, serving four years while working in critical care and cardiology at St. Mary’s Hospital in Grand Junction, CO.  In 2009, he returned to active duty with a branch transfer to the Commissioned Corps. Immediately prior to his current assignment, he was the Director of Diving Medicine for the National Oceanic and Atmospheric Administration. His tenure there included chairing the NOAA Diving Medical Review Board, advisory member of the NOAA Diving Control and Safety Board, member of the NOAA Health Services Executive Leadership team, and co-director of the National Oceanic and Atmospheric Administration/Undersea and Hyperbaric Medical Society Physicians Training in Diving Medicine program.  Additionally, he has been a member of Rapid Deployment Force – Team Three serving as the deputy group supervisor for the mid-level provider group and deploying to Hurricane Irene, Superstorm Sandy, and Hurricane Maria.
Captain Dulaigh received his bachelor of science in nursing from Mesa State College, Grand Junction, CO, in 1993.  In 2000, he received his nurse practitioner degree from the University of Texas – Houston Health Science Center. He is a fellow of the American Association of Nurse Practitioners and serves as the U.S. Public Health Service to the group.
Content created by Office of the Surgeon General
Content last reviewed on May 14, 2019