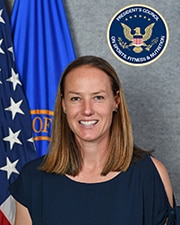 Shauna Rohbock was appointed to serve as a member of the President’s Council on Sports, Fitness & Nutrition.  Rohbock is an Olympic silver medalist, former professional soccer player, a soldier in the U.S. Army National Guard, part of the U.S. Army World Class Athlete program (WCAP), and a bobsled coach.

Rohbock grew up playing soccer and running track. She graduated from Brigham Young University (BYU) in 1999, with a degree in recreation management. While attending BYU, she was named All-American 2x in both soccer and track and field (heptathlon). She set several BYU women’s soccer records, having scored 95 goals in 368 shots during her 90 games. She played professionally with the club San Diego Spirit during the 2002/2003 seasons.

In 2000, she joined the Utah Army National Guard and is part of the U.S. Army World Class Athlete Program (WCAP).

Rohbock began the sport of bobsled in 1999 as a brakewoman and became driver in 2002. She was named to the 2006 Olympic Team in Torino, Italy, and capped off a successful season by winning a silver medal with brakewoman Valerie Fleming.  She finished the 2006-2007 season with seven World Cup medals (two gold, four silver, one bronze)—first in Calgary and Park City where she set a new track record—and ranked first overall in World Cup standings. She earned one silver and two bronze medals during the 2007-2008 season. During the 2008-2009 season, Rohbock was fourth overall in the World Cup with two gold, one silver, and one bronze medals. Rohbock won silver at the 2009 World Championships and was ranked third overall in Fédération Internationale de Bobsleigh et de Tobogganing (FIBT) women’s bobsled rankings.

She ranked fourth overall in the 2009-2010 season, winning two gold and one bronze in World Cup competition. Rohbock was named to the 2010 Winter Olympic team and finished sixth with teammate Michelle Rzepka. She finished third overall in the 2010-2011 World Cup standings winning four World Cup medals and a silver at the World Championships. Rohbock and Fleming have won the most medals ever on the World Cup circuit for a U.S. pair, male or female.

She coached TEAM USA Bobsled men and women at the 2018 Winter Olympics, a role she combined with a position as part of the coaching staff for the Brazilian men's bobsled. When Rohbock is not traveling with the National bobsled team, she is the driving coach for the G-Force bobsled development at the Utah Olympic Park.

Rohbock is the middle child of seven siblings: five sisters and one brother. She is married and has two children. One of the things she loves most about bobsledding is that it gives her the chance to see the world.