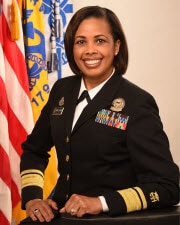 RADM Trent-Adams has held several leadership positions in HHS, working to improve access to care for poor and underserved communities. As both a clinician and administrator, she has had a direct impact on building systems of care to improve public health for marginalized populations domestically and internationally.

Prior to joining the Office of the Surgeon General, RADM Sylvia Trent-Adams was the Deputy Associate Administrator for the HIV/AIDS Bureau, Health Resources and Services Administration. She assisted in managing the $2.3 billion Ryan White program, which funds medical care, treatment, referrals and support services for uninsured and underserved people living with HIV disease as well as training for health care professionals.

RADM Trent-Adams began her career in the Commissioned Corps in 1992. Prior to joining the USPHS, RADM Trent-Adams was a nurse officer in the U.S. Army and a research nurse at the University of Maryland. She also completed two internships in the U.S. Senate, where she focused on the prospective payment system for skilled nursing facilities and scope of practice for nurses and psychologists. Her clinical practice was in trauma, oncology, community health, and infectious disease. She is a former Chair of the Federal Public Health Nurse Leadership Council, and the Federal Nursing Service Council.

RADM Trent-Adams has published widely and received numerous awards for her leadership and contributions to the field of nursing and public health, including a Meritorious Service Medal for her leadership during the Commissioned Corps response to the Ebola Outbreak in West Africa and the Surgeon General’s Medallion for her time spent as acting Surgeon General. She is the recipient of the American Nursing Credentialing Center’s HRH Princess Muna Al Hussein Award, the American Academy of Nursing’s Civitas Award, the American Association of the Colleges of Nursing’s Lois Capps Luminary Policy Award, and, in 2017, the recipient of the International Red Cross Florence Nightingale Medal, the highest international honor bestowed upon a nurse.