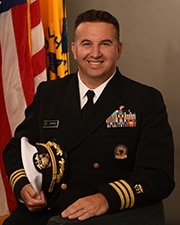 Commander (CDR) Matthew Johns is the Regional Health Administrator for Region 9 and a commissioned officer in the U.S. Public Health Service. As the senior federal public health official and scientist for the HHS Office of the Assistant Secretary for Health in Region 9, he oversees health and human service programs for Arizona, California, Nevada, Hawaii, American Samoa, Commonwealth of the Northern Mariana Islands, Federated States of Micronesia, Guam, Marshall Islands and the Republic of Palau and 150 federally-recognized Tribes.

In addition to his duties as Regional Health Administrator, CDR Johns serves as the Deputy for the Division of Preventive Medicine and the Chief Epidemiologist for PHS-2 Rapid Deployment Force. He deployed in response to the 2009 Haiti Earthquake, Superstorm Sandy in 2012, the Unaccompanied Children mission on the US - Mexico border in June 2014 and more recently to Hurricanes Maria, Harvey, Irma and Florence.  In November of 2014, CDR Johns deployed to Liberia as part of the U.S. Public Health Service Ebola response team where he served as the Chief of Preventive Medicine for the Monrovia Medical Unit.

Prior to joining Region 9, CDR Johns served in the HHS Office of Global Affairs where he was the Senior Global Health Security Advisor for the Asia and Pacific Region and a Senior Advisor and Liaison to the Command Surgeon, US Indo-Pacific Command. As part of his role with OGA, he assisted in the strategic alignment of over $1.5 Billion in U.S. funding and resources across Asia and throughout the Pacific.

CDR Johns earned his Master of Public Health degree in Global Health/Infectious Diseases from Emory University’s Rollins School of Public Health and a Bachelor of Science degree in Community and Public Health from Northern Illinois University. His areas of expertise include emerging infectious disease surveillance, epidemiology and response, and public health capacity building.