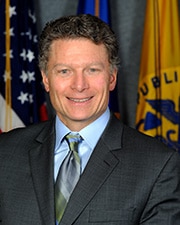 From 1996-2000, Dr. Paxman served as the Senior Environmental Health Advisor, Office of Disease Prevention and Health Promotion, providing advice to the Assistant Secretary for Health/Surgeon General on environmental health issues.  He was the senior staff on key multi-agency environmental health and science policy initiatives, including the President’s Food Safety Initiative and the President’s Task Force on Children’s Environmental Health and Safety.  He also served as the Department’s liaison to the National Science and Technology Council for the White House Office of Science and Technology Policy.

Dr. Paxman was a Senior Policy Analyst in the Environment Program at the Office of Technology Assessment in the U.S. Congress, where he directed congressional studies in the areas of health risk assessment research, comparative risk assessment, and environmental regulations.  He was a research toxicologist and a post-doctoral scholar for the UC Berkeley, School of Public Health.  He received his Ph.D. in Environmental Health Sciences from the Johns Hopkins University, School of Hygiene and Public Health, where he received the Kruze Award for Excellence in Environmental Health Research.