Today, the Trump Administration announced that as part of its ongoing work to tackle the epidemic of youth e-cigarette use, the FDA intends to finalize a compliance policy in the coming weeks that would prioritize the agency’s enforcement of the premarket authorization requirements for non-tobacco-flavored e-cigarettes, including mint and menthol, clearing the market of unauthorized, non-tobacco-flavored e-cigarette products. The FDA plans to share more on the specific details of the plan and its implementation soon.

“The Trump Administration is making it clear that we intend to clear the market of flavored e-cigarettes to reverse the deeply concerning epidemic of youth e-cigarette use that is impacting children, families, schools and communities,” said Health and Human Services Secretary Alex Azar. “We will not stand idly by as these products become an on-ramp to combustible cigarettes or nicotine addiction for a generation of youth.”

“We appreciate President Trump and Secretary Azar’s continued support of the agency’s efforts to prevent youth use of e-cigarettes, including the bold approach we’re announcing today. Once finalized, this compliance policy will serve as a powerful tool that the FDA can use to combat the troubling trend of youth e-cigarette use. We must act swiftly against flavored e-cigarette products that are especially attractive to children. Moreover, if we see a migration to tobacco-flavored products by kids, we will take additional steps to address youth use of these products,” said Acting FDA Commissioner Ned Sharpless, M.D. “The tremendous progress we’ve made in reducing youth tobacco use in the U.S. is jeopardized by this onslaught of e-cigarette use. Nobody wants to see children becoming addicted to nicotine, and we will continue to use the full scope of our regulatory authority thoughtfully and thoroughly to tackle this mounting public health crisis.”

Following a rule which became effective August 8, 2016, all electronic nicotine delivery system (ENDS) products were expected to file premarket tobacco product applications with the FDA within two years. ENDS products currently on the market are not being legally marketed and are subject to government action. The compliance policy the FDA anticipates announcing in the coming weeks will outline enforcement policy addressing non-tobacco-flavored e-cigarette products that lack premarket authorization moving forward.

The Trump Administration has demonstrated a deep commitment to preventing youth from using all tobacco products, including e-cigarettes, and the finalization of the compliance policy will be an important step in ongoing work to ensure e-cigarettes are not marketed to, sold to, or used by kids.

The FDA has been holding retailers and manufacturers accountable for marketing and sales practices that have led to increased youth accessibility and appeal of e-cigarettes. For example, the FDA has issued more than 8,600 warning letters and more than 1,000 civil money penalties (fines) to retailers — both online and in brick-and-mortar retail stores — for sales of ENDS and their components to minors. The agency has also issued warning letters — many in collaboration with the Federal Trade Commission (FTC) — that resulted in the market removal of dozens of e-liquid products resembling kid-friendly juice boxes, cereal, and candy. Additionally, the FDA and FTC cited firms that make and sell flavored e-liquids for violations related to online posts by social media influencers on their behalf.

Most recently, on September 9, the FDA issued a warning letter to JUUL Labs Inc. for marketing unauthorized modified risk tobacco products by engaging in labeling, advertising, and/or other activities directed to consumers, including a presentation given to youth at a school. Concurrently, the agency issued a second letter expressing its concern — and requesting additional information — about several issues raised in a recent Congressional hearing regarding JUUL’s outreach and marking practices, including those targeted at students, tribes, health insurers and employers.

The Administration has also continued to invest in campaigns to educate youth about the dangers of e-cigarette use. Last year, the FDA launched “The Real Cost” Youth E-Cigarette Prevention Campaign – a comprehensive effort targeting nearly 10.7 million youth, aged 12-17, who have used e-cigarettes or are open to trying them. The campaign features hard-hitting advertising on TV, digital and social media sites popular among teens, as well as posters with e-cigarette prevention messages in high schools across the nation.

The FDA in partnership with the Surgeon General joined forces with Scholastic to distribute youth e-cigarette prevention posters and lesson plans to every public and private high school in the U.S. – with additional resources planned for middle school educators throughout the 2019-2020 school year. The agency also released resources for doctors, youth groups, churches, state and local public health agencies, and others on the dangers of youth e-cigarette use and has undertaken efforts to further the discussion and understanding around how to help aid those kids who are already addicted to e-cigarettes quit.

In December 2018, the Surgeon General issued an advisory on e-cigarette use among youth, emphasizing the importance of protecting youth from a lifetime of nicotine addiction and associated health risks in light of the epidemic of youth e-cigarette use. 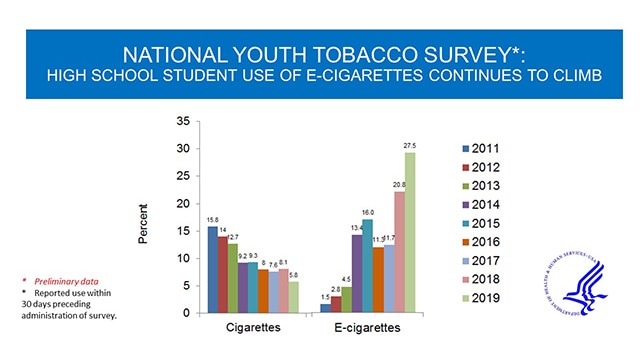 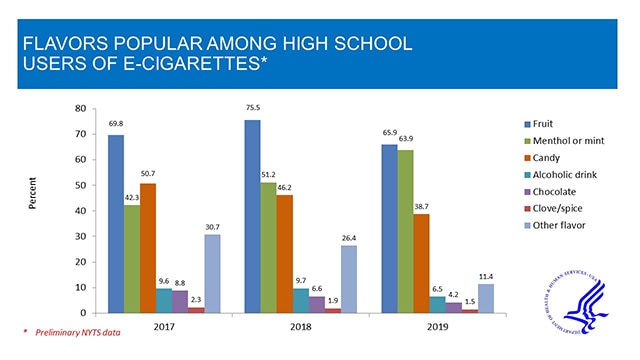