Monday, May 20, 2019, Health and Human Services Secretary Alex Azar is participating in the 72nd World Health Assembly (WHA) as head of the U.S. delegation. Since arriving in Geneva, Switzerland, Secretary Azar has delivered the U.S. plenary statement and participated in multiple bilateral meetings with his counterparts.

In his plenary address, Secretary Azar emphasized the importance of the World Health Organization (WHO) focusing on its core mission, of supporting global public health and health security. He noted that international assistance and a new vaccine have helped mitigate the current Ebola outbreak in the Democratic Republic of the Congo (DRC), but also emphasized that “the outbreak is not under control.”

He thanked WHO Director-General Tedros for his personal leadership on the Ebola issue and commitment to WHO reform generally, and also emphasized that WHO must be more welcoming to contributions from the private sector. Finally, he noted that President Trump has undertaken an aggressive campaign to bring down drug prices over the last year, including the first-ever proposal by a President to use reference pricing, and noted that there are many potential areas for international cooperation on access to safe, effective, and affordable medicines.

On the sidelines of the WHA, Secretary Azar has met with Ma Xiaowei, Minister of China’s National Health Commission. They discussed the U.S. and China’s strong collaboration on health issues, including immunizations, infectious diseases, and global health security.

He met with Dr. Matshidiso Moeti of the WHO Regional Office for Africa. They discussed the Ebola outbreak in the DRC, with the Secretary noting that the U.S. has provided approximately half of the funding to the WHO, DRC, and nongovernmental response to the outbreak and will continue to support response efforts in the region and at WHO.

On Monday, the Secretary also met with Park Neunghoo, Minister of Health and Welfare of the Republic of Korea. They discussed a number of areas for collaboration between the U.S. and South Korea, including the importance of vaccinations, opportunities for responsible data sharing regarding cohort studies that cover large populations (which both nations are undertaking, including the NIH’s “All of Us” study), and research collaborations regarding brain disease and aging.

Finally, Secretary Azar met with Chile’s Minister of Health, Emilio Santelices Cuevas, and discussed the importance that the U.S. has placed on aiding the region in responding to the public health effects of the illegitimate Maduro regime’s destruction of Venezuela’s healthcare system. Topics also included reforms of healthcare financing in both countries, including the need for high-quality risk adjustment to support value-based payments, and opportunities Chile is considering to streamline prescription drug approvals.

Additional information and details regarding the Secretary’s travel and meetings will be forthcoming. 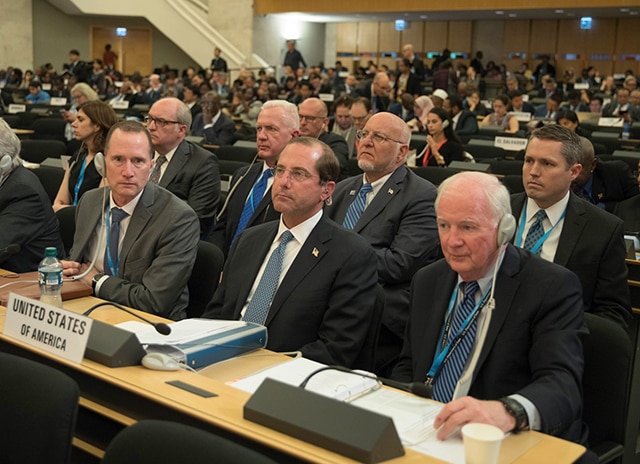