Today, May 17, 2019, Health and Human Services Secretary Alex Azar participated in bilateral meetings with health ministers, attended the final day of the G7 Health Ministerial Meeting in Paris, France, as the head of the U.S. delegation, and attended a Global Health Security Initiative (GHSI) Special Ministerial Meeting on Ebola.

In the morning, Secretary Azar participated in a bilateral meeting with Matt Hancock, the United Kingdom’s Secretary of State for Health and Social Care, where they discussed the current status of the Ebola outbreak in the Democratic Republic of the Congo (DRC) and how to collaborate to stop the spread of the disease and provide support on the ground. Next, they discussed the current measles outbreak and the importance of vaccinations. They also discussed the opioid crisis in the United States and lessons learned. Secretary Azar detailed the U.S. Centers for Disease Control and Prevention (CDC) Guideline for Prescribing Opioids for Chronic Pain, expanding access to treatment that works, especially to medication-assisted treatment with appropriate social supports, and the importance of access to the overdose-reversing drug naloxone to save lives.

Next, at the G7 Health Ministerial Meeting, the health ministers continued their discussion about the importance of strengthening primary healthcare and the need for enhanced communication and coordination between nations. During the meeting, the ministers also discussed replenishment of the Global Fund, an essential partner in the fight against the three major infectious diseases (AIDS, Tuberculosis, and Malaria) in the world. The U.S. has invested over $13.8 billion in the Global Fund since its establishment in 2002. The U.S. intends to continue its support of the Global Fund and anticipates being able to make a $3.3 billion pledge to the Sixth Replenishment (2020-2022), while offering to match $1 from the United States for every $3 pledged by other donors.

Later in the morning, Secretary Azar participated in a bilateral meeting with Jens Spahn, Germany’s Federal Minister of Health, where they discussed President Trump and Secretary Azar’s plan to lower prescription drug costs for American patients and how the U.S. drug pricing system compares to Germany’s system. They also discussed the Ebola outbreak in the DRC and how the two nations and others must work together towards a strategic approach to support efforts on the ground.

At the conclusion of the G7 Health Ministerial Meeting, the ministers participated in a press conference and agreed to the G7 Health Ministers’ Declaration which emphasizes France’s two main deliverables in the G7 health track: replenishment of the Global Fund and establishment of a web-based, information-sharing platform on Primary Healthcare. In the Declaration, the G7 leaders recommit to continue to offer assistance to 76 partner countries and regions to implement the World Health Organization International Health Regulations, building on countries’ expertise and existing partnerships, to strengthen and maintain core capacities required; and therefore, to help reduce the vulnerability of countries to public health emergencies.

In the afternoon, Secretary Azar hosted ministers for a GHSI Special Meeting on Ebola. Meeting participants discussed potential GHSI actions to ensure timely access to Ebola vaccines and the need to sustain a global infrastructure for medical countermeasures. Ministers received an update from the World Health Organization on the current status of Ebola in the DRC and discussed the need for continued collaboration and funding to address the outbreak and prevent its spread to other nations. Secretary Azar highlighted the need for GHSI members to have a leading role in ensuring a sustainable global infrastructure for medical countermeasures for naturally occurring emerging diseases, and chemical, biological, and radiological/nuclear agents.

Later, Secretary Azar met with Jamie D. McCourt, U.S. Ambassador to the French Republic and Principality of Monaco. They discussed the G7 Health Ministerial Meeting and the United States’ work to promote global health security at home and abroad.

Additional information regarding Secretary Azar’s meetings and schedule will be forthcoming in news releases and social media posts. 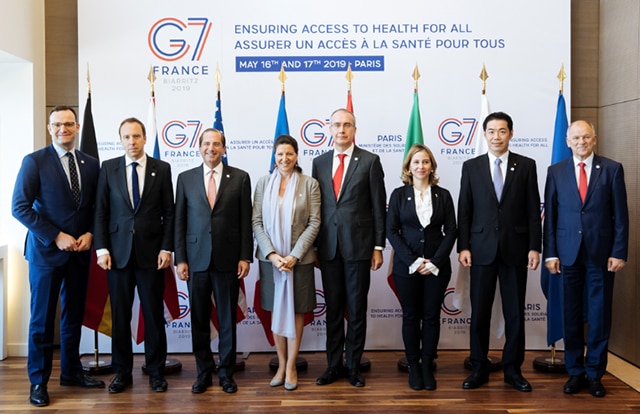 Secretary Alex Azar and the health ministers at the G7 Health Ministerial Meeting in Paris, France
###
Note: All HHS press releases, fact sheets and other news materials are available at https://www.hhs.gov/news.
Like HHS on Facebook, follow HHS on Twitter @HHSgov, and sign up for HHS Email Updates.
Last revised: May 17, 2019