“The President’s blueprint for lower drug prices is working, drug prices are coming down, and American patients are going to see the savings in their pocketbook.” — Secretary Alex Azar

Tomorrow, August 21, marks 100 days since the release of President Trump’s American Patients First Blueprint to Lower Drug Prices and Reduce Out-of-Pocket Costs. In this short period of time, an unprecedented number of actions have been taken toward structurally rebuilding this entire segment of the economy to lead to enduring lower prices that are sustainable, support innovation, and put American patients first.

Below is the introduction to a new report on the 100 days of action from Dan Best, Senior Advisor to the Secretary for Drug Pricing Reform:

“For years, American patients have suffered under a drug-pricing system that provides generous incentives for innovation, while too often failing to deliver important medications at an affordable cost. The flaws in America’s drug markets have been a topic of discussion in healthcare policy circles for years, but no comprehensive approach to reform has ever been undertaken.

“The extensive number of proposals in the blueprint reflect the scale of the task: restructuring and reforming a fundamentally flawed drug-pricing system that governs a more than $400 billion sector of our economy. Reforms of significant parts of the healthcare market on a similar scale, such as Medicare Part D, have generally taken several years to implement, and several years after that to effect changes across the entire drug market.

“In the 100 days since May 11, HHS has taken dozens of actions on the four strategies contemplated in the blueprint: increased competition, better negotiation, incentives for lower list prices, and reducing out-of-pocket costs. Together, these actions have helped bring into focus a vision for a more competitive pharmaceutical marketplace. Pharmaceutical manufacturers, pharmacy benefit managers, and other actors in the market have indicated that they recognize the scale of disruption this would involve.

“At the time of the release of the blueprint, few observers believed that, within months, drug manufacturers would begin to change their annual ritual of significant price hikes. Yet that is what happened in the months following.

“Within these first 100 days, 15 drug companies have reduced list prices, rolled back planned price increases, or committed to price freezes for the rest of 2018. Cutting list prices and rolling back proposed increases in particular are an unprecedented recognition of the fundamental changes going on in drug markets.” 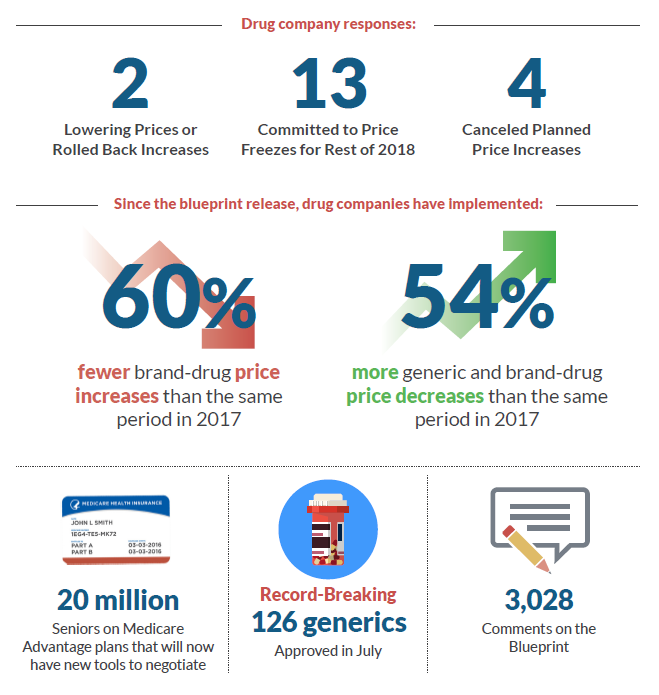 And to read a fact sheet on 100 days of results from the blueprint, please visit: https://www.hhs.gov/sites/default/files/100DaysofResults_AmericanPatientsFirstBlueprint.pdf