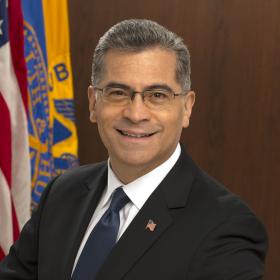 Get to Know Secretary Becerra

Xavier Becerra is the 25th Secretary of the Department of Health and Human Services and the first Latino to hold the office in the history of the United States.

The top five priorities at HHS are:

How We're Building a Healthier America

HHS has taken critical steps to improve the health and well-being of all Americans. Read the snapshot to learn about our progress and the path forward.

Xavier Becerra is the 25th Secretary of the Department of Health and Human Services and the first Latino to hold the office in the history of the United States. As Secretary, he will carry out President Biden's vision to build a healthy America, and his work will focus on ensuring that all Americans have health security and access to healthcare.

Throughout his career, the Secretary has made it his priority to ensure that Americans have access to the affordable healthcare they need to survive and thrive - from his early days as a legal advocate representing individuals with mental illness, to his role as the Attorney General of the state of California.

For over two decades in Congress, Secretary Becerra worked so that every family had the assurance of care that his own family had when he was growing up. As a member of the Ways and Means Committee, Secretary Becerra introduced legislation -- the Medicare Savings Programs Improvement Act of 2007 -- that expanded cost-sharing subsidies for low-income seniors who receive both Medicare and Medicaid benefits by increasing the amount of resources they could receive. He championed provisions of the Medicare Improvements for Patients and Providers Act of 2008 that required physicians who perform imaging to be accredited and trained to ensure patient safety. And he was one of the original cosponsors of the Patient Protection and Affordable Care Act (ACA) which strengthened Medicare and lowered costs for seniors.

As Attorney General of the state of California, Secretary Becerra helped to promote competition by taking on a number of pharmaceutical companies that restricted competition through "pay-for-delay" schemes, held several companies accountable for legal violations for not protecting patients' health information, and took action early in the pandemic to keep Californians safe by using his authority to protect workers from exposure to COVID-19, secure key safeguards for frontline health care workers' rights, and take on fraudsters trying to take advantage of people during the pandemic. In addition, he cracked down on Medicare and Medicaid fraud, acted to combat the opioid crisis, including holding drug makers accountable, won an unprecedented $575 million antitrust settlement against one of the largest health systems in California, and he led the three-year federal court fight to save the ACA and with it, the protections of the 133 million Americans with preexisting conditions.

Born in Sacramento Secretary Becerra is the son of working-class parents. He was the first in his family to receive a four-year degree, earning his Bachelor of Arts in Economics from Stanford University. He earned his Juris Doctorate from Stanford Law School. His mother was born in Jalisco, Mexico and immigrated to the United States after marrying his father, a day laborer turned construction worker. He is married to Dr. Carolina Reyes, and he is proud of his three daughters: Clarisa, Olivia and Natalia, and son-in-law Ivan.

Tweets by @SecBecerra
Join the Conversation