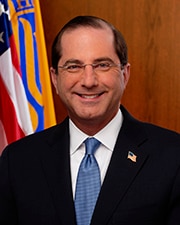 Alex M. Azar II was sworn in as the 24th Secretary of Health and Human Services on January 25, 2018. He has spent his career working in both the public and private sectors, as an attorney and in senior leadership roles focused on advancing healthcare reform, research, and innovation.

While at HHS, Secretary Azar has developed and led President Trump’s vision for healthcare: a patient-centric, affordable, personalized system that puts the patient in control and treats the patient like a human being, not like a number. He has pioneered a patient-centered approach to the value-based transformation of the American healthcare system, including through transparency around price and quality, outcomes-based payments, interoperable health IT, provider collaboration, and unprecedented regulatory relief that places patients over paperwork. Under his tenure, HHS has transformed the pharmaceutical marketplace, driving down drug prices through a comprehensive drug pricing strategy and approval of historic levels of generic, brand, and biosimilar drugs. The Department has also worked to make health insurance more affordable and created more options for Americans who lack employer-based insurance.

Under President Trump’s leadership, HHS has helped turn around the rising rate of deaths from opioid overdoses through a comprehensive, science and evidence-based approach. Secretary Azar launched President Trump’s historic effort to end the HIV epidemic in America. With Azar’s leadership, the department is also tackling maternal mortality and gaps in rural healthcare, as well as bringing new hope to people suffering from kidney disease and addressing key social determinants of health. A key part of Secretary Azar’s agenda has been protecting the nation against infectious disease threats such as Ebola, influenza, and measles, ensuring the United States is prepared for manmade and naturally occurring disasters and threats, and leading global efforts to protect public health. Secretary Azar has also been a leading advocate to keep e-cigarettes out of the hands of our children.

Under Secretary Azar, HHS has worked to empower able-bodied adults receiving Medicaid through community engagement and restored the focus of human service programs to promoting independence, dignity, and work. HHS has also championed efforts to improve access and care for those suffering from serious mental illness.

His current tenure at HHS is a second tour of duty at the Department, after serving as its General Counsel from 2001 to 2005 and then as Deputy Secretary from 2005 to 2007.

From 2007 through January 2017, Azar was a senior executive at Eli Lilly and Company in Indianapolis, Indiana.