Fighting improper payments in Medicare: The estimated improper payment rate in Medicare decreased from 8.12 percent in 2018 to 7.25 percent in 2019, the third consecutive year the rate has been below the 10 percent threshold for compliance established by Congress in 2010. In addition, through the Medicare Address Validation project, CMS prevented between $5 and $23 billion in fraud in 2019.

Taking down largest healthcare fraud scheme ever charged: Two Florida residents were convicted in the largest healthcare fraud scheme ever charged by federal authorities, in which the scheme’s leader bribed doctors into admitting patients into his care facilities. In addition to billing Medicare and Medicaid a record $1.3 billion in fraudulent claims, the facilities provided inadequate care.

Protecting taxpayer funds: In 2019, the Office of Inspector General returned some $5.9 billion in taxpayer funds (overwhelmingly related to Medicare and Medicaid), excluded 2,640 bad actors from billing HHS programs, and brought more than 1,400 civil and criminal actions against wrong doers.

Top federal agency in reducing regulatory burden: For the second year in a row, HHS ranked first overall among all federal agencies in reducing the present-value economic burden of its regulations by $11.4 billion. From FY 2017 to 2019, HHS achieved a total reduction in economic burden of $25.7 billion in present-value savings, with 46 deregulatory actions compared with just 18 regulatory actions—approximately a 2.5:1 ratio

Reducing burdens on providers to allow more time to be spent on care: As part of the Meaningful Measures Initiative, CMS eliminated 79 measures across quality payment programs that resulted in projected savings of $128 million across provider settings. Through the Omnibus Burden Reduction Rule, CMS implemented changes to save providers an estimated 4.4 million hours of time previously spent on paperwork with an overall projected savings to providers of $800 million annually. Additionally, the Office of the National Coordinator for Health Information Technology (ONC) and CMS jointly published a draft Strategy on Reducing Regulatory and Administrative Burdens Relating to the Use of Health IT and EHRs for public comment.

Fixing Federal Register mistakes and inconsistencies through AI: The Deputy Secretary’s office initiated an experimental AI-enabled review of all HHS regulations that identified hundreds of technical errors and over 50 opportunities to remove paperwork submission requirements—especially outdated requirements like faxes. This effort was featured in September at the White House AI in Government Summit, and is now being implemented through a coordinated effort across the department to issue new rules corrections that will clean up HHS regulations and rescind unnecessary and outdated requirements.

Moving to a 21st century workforce: Under the “Maximize Talent” initiative, HHS’s Office of Human Resources implemented a reform pilot in the Washington D.C. area HR Center to include shared certificates, which expedited the recruitment and hiring process by allowing multiple managers to select from the same candidate pool. An average of 73 percent of candidates selected during the pilot (Q1-Q3) were from simplified recruitments (either shared certificates or other express hires) resulting in a 168 percent increase in the number of new hires scheduled to enter on duty.

Improving NIH operations: The “Optimize NIH” initiative launched the FOIAXpress platform and public request portal in the second quarter of FY 2019, allowing NIH to increase the number of processed FOIA requests by 126 percent and decreased its FOIA backlog by 24 percent.

Reforming acquisitions: The “Buy Smarter” initiative has used blockchain technology, artificial intelligence, and machine learning to identify opportunities to achieve over $720 million in annual cost avoidance and savings on goods and services, once fully operational. By the end of FY 2020, HHS anticipates realizing between $6 and $9.5 million in cost avoidance and savings related to these efforts.

Accelerating clinical innovation: The “Accelerate Clinical Innovation” initiative established a partnership with FasterCures to engage public and private partners in shared efforts to further map, accelerate, and measure the innovation ecosystem at HHS.

Making HHS more innovative and responsive: Under the “Optimizing Regional Performance” initiative, HHS developed a Regional Facilities Utilization Model that has identified $150 million in potential savings at four regional offices and a 62 percent reduction in footprint within ten years. At the same time, three divisions have realigned their regional offices, eight offices have created optimization plans, and the role of HHS’s Regional Directors has been strengthened to maximize collaboration across the regions and within HHS and provide increased authority and oversight.

Enterprise Infrastructure Solutions: HHS began implementing its new Enterprise Infrastructure Solutions contract, which includes high-speed circuits to support the HHS network, audio conferencing, voice-over internet protocol, and cloud services that will yield a cost savings of at least $111 million over the life of the 13-year contract period. Establishing a single program office for the contract, HHS will net an additional $86 million in cost avoidance.

Upgrading human capital management: In May, the Office of the Assistant Secretary for Administration (ASA) successfully upgraded HHS’s central enterprise human capital management system, representing the culmination of more than 9 months of focused effort to create a lasting baseline and single cloud-based solution for managing HHS personnel transaction and reporting. In less than two months, the team trained more than 3,500 users and implemented a retroactive pay raise resulting in more than 90,000 pay adjustments in the middle of the transition to the new system, while keeping the project $12 million under budget.

Faster processing of FEVS results: In 2019, HHS adopted an Employee Viewpoint Survey Analysis and Results Tool (EVS ART), an innovative, no-cost tool developed by the NIH’s National Institute of Diabetes and Digestive and Kidney Diseases to automate analysis of the Federal Employee Viewpoint Survey, reducing agency processing time from weeks to minutes. The tool has now been provided as a resource to every executive department as a way to help agencies identify the lowest scoring 20 percent of work units and set goals for improvement under the President’s Management Agenda.

Bolstering OMHA workforce: In 2019, the Office of Medicare Hearings and Appeals (OMHA) took important steps to bolster its workforce and enhance efficiency, enabling it to beat a target for reducing the appeals backlog. OMHA:

Moving to more electronic appeals processing: In 2019, the Departmental Appeals Board (DAB) continued with the Medicare Operations Division’s Digital Transformation Initiative, by enhancing the division’s electronic case management system to permit direct upload of work product and related documents. This has allowed the DAB to coordinate with CMS to implement the electronic upload of claim files directly from CMS contractors to the Medicare divisions case processing system—saving time, minimizing the amount of paper changing hands, and eliminating the need for physical mailing. 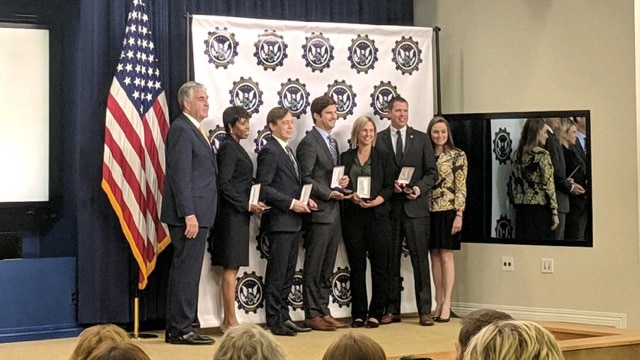 Best cabinet-level agency at which to work: HHS was ranked the best cabinet-level agency to work at in the Federal Government for the third year in a row, according to the 2019 Federal Employee Viewpoint Survey (FEVS) results. To drive increased FEVS participation and engagement, ASA developed and executed an eight-week enterprise communications campaign that included department-wide e-blasts, senior leader video messages, and promotional marquees on the HHS Intranet and HHS TV monitors, contributing to an HHS Employee Engagement Index increase of 0.7 percentage points in 2019, to 73.5, which is 5 points higher than the overall government-wide average.

Improving SES oversight, performance, and position management: ASA developed a new Charter to establish the Executive Resource Board (ERB), chaired by the Deputy Secretary, to provide senior leader oversight and accountability throughout the HHS SES Corps, leading to the creation of a new program to establish defined criteria for performance award and performance pay adjustments for SES staff. 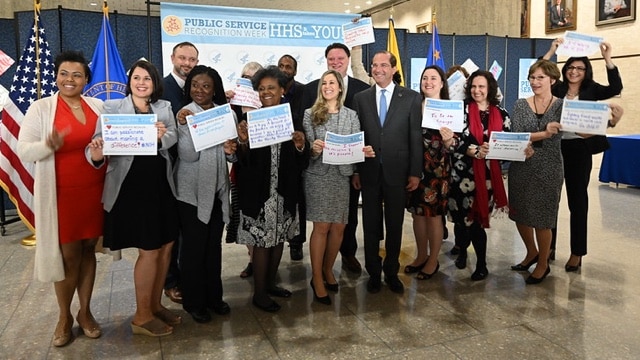 Maximizing the Promise of Data

Using emerging technologies to identify savings: The Office of the Chief Information Officer (OCIO) established a recurrent neural network that identified more than $110 million in budgetary savings in the Office of the Secretary alone. OCIO also stood up a neural network for cybersecurity at no additional cost and reduced the time required to analyze security data from four days to minutes.

Laying the foundation for an HHS data hub: The Office of the CTO published a report with the future roadmap for integrating HHS data and awarded a contract to build the first-ever, enterprise-wide Data Sharing Hub and governance model, including the development of standardized inter-agency data use agreements.

Advancing interoperability: The HL7 Fast Healthcare Interoperability Resource (FHIR)®, the adoption of which has been supported in part by ONC, became the basis for the Apple “Health Records” app, using the standard to create a foundation for convenient access to electronic health information for more than 100 million American iPhone users. Recently, the University of California San Francisco and Cornell University Tech announced an initiative called “CommonHealth” to bring medical records to Android-based smart phones using the same FHIR standard.

Moving toward a trusted health IT framework: ONC awarded a cooperative agreement to The Sequoia Project to serve as the Recognized Coordinating Entity to help develop, update, implement, and maintain the Trusted Exchange Framework and Common Agreement, which will create the baseline requirements for health information networks to share electronic health information. ONC also released the first draft of the Qualified Health Information Network Technical Framework, which describes technical and functional requirements for exchange among Qualified Health Information Networks.

Using technology to help with training to combat trafficking: In 2019, ACF’s Office of Trafficking in Persons expanded their training abilities through technology and strategic partnerships to have the ability to train more than two million individuals to recognize and identify human trafficking.

Using PulseNet to detect foodborne illness outbreaks: CDC completed the transition to whole genome sequencing in PulseNet, the national laboratory network that connects foodborne illness cases in order to detect outbreaks. The technique, for example, has been successfully used to detect and investigate Listeria outbreaks, yielding a threefold increase in the number of Listeria outbreaks solved and decreasing the overall size of these outbreaks. Following the switch to the new sequencing technique in July, the PulseNet system received and evaluated more than 24,500 whole genome sequences and investigated more than 160 clusters of foodborne outbreaks.

Bolstering the Security and Efficiency of the Biomedical Research Enterprise

Using the cloud to advance biomedical research: NIH’s STRIDES Initiative provides NIH intramural researchers and NIH-funded researchers at more than 2,500 research and academic institutions with cost-effective access to industry-leading cloud environments, tools, and services. Since its launch in 2018, the initiative has moved over 30 petabytes of biomedical research data into the cloud, including many of NIH’s high-value datasets, such as the National Cancer Institute’s Genomic Data Commons, the Framingham Heart Study, the Gabriella Miller Kids First Pediatric Research Program, and NIH’s largest dataset, the Sequence Read Archive (SRA). As a result of the STRIDES Initiative, NIH-funded research programs are benefitting from $4.7 million in annualized cost savings.

Protecting the security of our biomedical enterprise: Through the Office of National Security, HHS expanded its partnerships with the national security community, and higher education partners, to respond to threats to the U.S. research enterprise. HHS worked across the whole of government to address the importance of balancing the need for scientific advancement while protecting data and intellectual property.