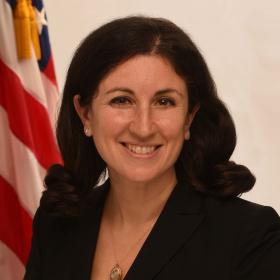 Sarah previously served as Special Assistant for Strategic Communications to then-California Attorney General Xavier Becerra. Advising Becerra from Washington, Sarah oversaw a national communications and outreach program with a focus on protecting access to healthcare. She led press and stakeholder strategy around the three-year-long court battle to save the Affordable Care Act, an antitrust case against one of America's largest hospital systems and efforts to curb prescription drug costs, tackle the opioid epidemic and more.

Earlier, Sarah served as Communications Director for the House Democratic Caucus when Becerra was Caucus Chair, driving communications strategy for House Democrats in concert with Congressional leadership while serving as Becerra's spokesperson. Before that, she directed communications for a non-profit that helped young adults gain health coverage and worked as an aide to then-Senate Majority Leader Harry Reid during the implementation of the Affordable Care Act.

Sarah began her career in journalism at The Washington Post and National Journal.

She holds a Master's Degree in Government from Johns Hopkins University and a Bachelor's Degree in Journalism from George Washington University. She lives with her husband, Zach, and two young children, Andrew and Mollie. A native of Washington, D.C., Sarah grew up in Rochester, NY.