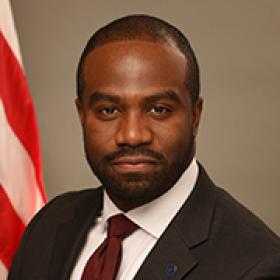 Marvin B. Figueroa serves as the Director of the Office of Intergovernmental and External Affairs (IEA) at the U.S. Department of Health and Human Services (HHS). In this capacity, he is the Secretary of Health and Human Services' principal adviser on strengthening intergovernmental relationships with state, local, territorial and tribal governments as well as private sector, nonprofit, faith-based, and other external partners to advance the Administration's health and human services priorities. In addition to leading the IEA staff in Washington, D.C., Director Figueroa oversees ten regional offices representing the Secretary and the Administration at both the state and local levels.

Most recently, Director Figueroa served as Deputy Secretary of Health and Human Resources in the Administration of Governor Ralph S. Northam, 73rd Governor of the Commonwealth of Virginia, where he led the day-to-day operations of the Health and Human Resources (HHR) Secretariat that is comprised of 12 health and social services agencies that collectively touch the lives of close to one-in-four Virginians, employ over 14, 700 individuals, and have a $22 Billion annual operating budget. During the 2020 Virginia General Assembly legislative session, he served as Governor Northam's Legislative Director, where he built bipartisan coalitions to advance the Governor's health insurance agenda focused on improving access to quality, affordable health insurance coverage, as well as Medicaid Expansion implementation.

Director Figueroa also worked in the United States Senate as Senior Advisor to Senator Mark R. Warner where he advised the Senator on Medicare, Medicaid, the Affordable Care Act, and other health care issues. From 2015-2017, he co-led the bipartisan Senate Finance Committee Chronic Care Working Group that led to the bipartisan CHRONIC CARE Act of 2017 aimed to improve Medicare services and wrap-around supports for individuals with multiple chronic conditions. The legislation was signed into law in 2018.

Director Figueroa is originally from La Ceiba, Honduras (a proud Garifuna). He earned his Master's degree at Harvard and Bachelor's degree from Vanderbilt University, and is an alum of the Congressional Hispanic Caucus Institute and POSSE Foundation.