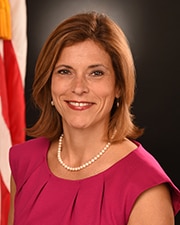 Joanne M. Chiedi serves as Acting Inspector General in the Office of Inspector General (OIG), Department of Health and Human Services (HHS), beginning in June 2019. Ms. Chiedi leads an independent and objective organization of more than 1,650 auditors, evaluators, investigators, attorneys, analysts, and management professionals who oversee the integrity and efficiency of the Nation’s over $1 trillion yearly investment in Federal health and human services programs. She is responsible for overseeing more than 300 programs administered by HHS agencies such as the Centers for Medicare & Medicaid Services, Administration for Children and Families, Centers for Disease Control and Prevention, Food and Drug Administration, and National Institutes of Health.

Ms. Chiedi was appointed Principal Deputy Inspector General at HHS in 2013. As the highest-ranking career official, she worked with stakeholders across the Federal government, private sector, and in Congress to enhance the effectiveness of OIG’s oversight, particularly in areas of coordinated care and payment reform. With an innovative approach to harnessing the power of data and analytics to strengthen OIG’s oversight, she focused on delivering a smarter, more innovative, and accountable Government.

From 2010 to 2013, Ms. Chiedi was the Deputy Inspector General for Management and Policy (OMP) at HHS. OMP oversees OIG’s budget and provides management, guidance, and resources to give OIG’s employees—located in over 70 cities across the country—the tools and technology they need to carry out their mission. From 2005 to 2010, Ms. Chiedi was the Deputy Director for Management in the HHS Office for Civil Rights. At the Department’s civil rights and health privacy rights law enforcement agency, she led headquarters and regional operational and programmatic activities and long-term strategic planning.

Before joining HHS, Ms. Chiedi was the Deputy Executive Officer for the Civil Rights Division, Department of Justice. She directed activities in four major functional areas: Information Technology, Procurement, Litigation Support, and Special Projects for the Division’s 1,000 employees. Before that, Ms. Chiedi served as Deputy Administrator for the Office of Redress Administration, a $1.64 billion program responsible for locating, verifying and issuing payment to the estimated 82,000 Japanese Americans who were interned or otherwise denied liberty in the United States during World War II.

Ms. Chiedi graduated from Mount St. Mary’s University in Emmitsburg, Maryland, with a degree in Sociology and minors in Criminal Justice and Business, and the Harvard University Kennedy School Senior Managers in Government program.