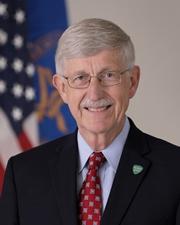 Dr. Francis S. Collins was officially sworn in on Monday, August 17, 2009 as the 16th director of the National Institutes of Health (NIH). Dr. Collins, a physician-geneticist noted for his landmark discoveries of disease genes and his leadership of the Human Genome Project, served as director of the National Human Genome Research Institute (NHGRI) at the NIH from 1993-2008. This remarkable international project culminated in April 2003 with the completion of a finished sequence of the human DNA instruction book.

In addition to his achievements as the NHGRI director, Dr. Collins' own research laboratory has discovered a number of important genes, including those responsible for cystic fibrosis, neurofibromatosis, Huntington's disease, a familial endocrine cancer syndrome, and most recently, genes for type 2 diabetes and the gene that causes Hutchinson-Gilford progeria syndrome.

Dr. Collins has a longstanding interest in the interface between science and faith, and has written about this in The Language of God: A Scientist Presents Evidence for Belief (Free Press, 2006), and is the author of a new book on personalized medicine, The Language of Life: DNA and the Revolution in Personalized Medicine (HarperCollins, to be published in early 2010).

Dr. Collins received a B.S. in chemistry from the University of Virginia, a Ph.D. in physical chemistry from Yale University, and an M.D. with honors from the University of North Carolina at Chapel Hill. He is an elected member of the Institute of Medicine and the National Academy of Sciences. Dr. Collins was awarded the Presidential Medal of Freedom in November 2007. In a White House ceremony on October 7, 2009, Dr. Collins received the National Medal of Science, the highest honor bestowed on scientists by the United States government.