On April 9, 2019, the Department of Health and Human Services’ (HHS) Deputy Secretary’s Innovation and Investment Summit (DSIIS) convened for its second meeting. HHS Deputy Secretary Eric Hargan and leaders from HHS agencies led DSIIS participants in a discussion about what might constitute the ideal future state of the U.S. healthcare system. The discussion focused on the key areas identified in the initial DSIIS meeting in December 2018. 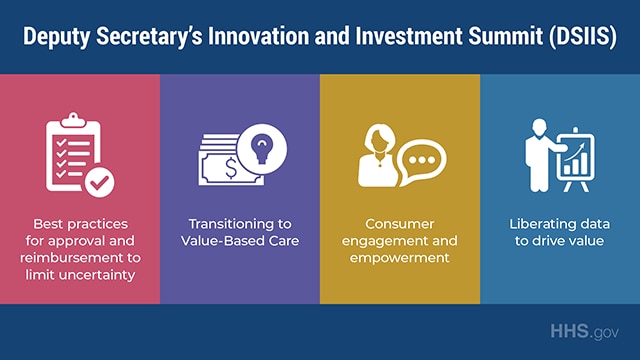 The meeting began with a discussion of how to “Liberate Data to Drive Value.” Dr. Don Rucker, National Coordinator for Health Information Technology with the Office of the National Coordinator for Health Information Technology (ONC), and Paul Mango, Chief Principal Deputy Administrator and Chief of Staff at the Centers for Medicare & Medicaid Services (CMS), provided context on proposed interoperability rules from their respective agencies. The group envisioned a future where patients could designate access to providers, researchers, and other stakeholders in a secure manner, so that data can be used to facilitate medical decision-making, effective research, and continuous improvement across healthcare delivery systems.

While DSIIS participants broadly agreed with these goals, there were questions as to how to best achieve them. Participants brainstormed on the ideal roles to be played by different stakeholders. There was a general belief that the healthcare technology industry, rather than the government, would be best positioned to drive the use of data to improve patient value, and that standards facilitating data interoperability and integrity could come out of industry collaboration with government.

"Unless we contextualize what data we’re trying to liberate, we won’t drive change.” -Todd Fruchtermann, 3M

The DSIIS group noted that use-cases for newly liberated data should be defined by the private sector and informed by patients. Participants stated that, ultimately, the healthcare technology industry must be responsible for making health data valuable, accessible and impactful to the day-to-day lives of patients. DSIIS participants agreed that data availability and standardization would be the first steps.

Next, DSIIS participants discussed “Best Practices in Regulatory Approval and Reimbursement.” In the initial DSIIS meeting, participants noted that the unpredictability of approval and reimbursement cycle times was dampening enthusiasm for investment in new healthcare technologies. Innovators noted, as an example, a 75% decline in overall investment in novel medical devices.

Participants were joined by Anand Shah, MD, Senior Medical Advisor for Innovation at CMS and Jeff Shuren, MD, JD, Director, Center for Devices and Radiological Health at the Food and Drug Administration (FDA). Drs. Shah and Shuren discussed HHS efforts to decrease regulatory and reimbursement cycle times, and in particular efforts to decrease the time gap between FDA approval and CMS coverage of breakthrough innovations. These efforts were welcomed by all participants.

“Capital is out there if there’s a good market of prospective investments...If we can prove the value of what we’re doing and show that there’s an exit, then people will pile back in.” -Jim Rogers, Mayo Clinic

Participants agreed that uncertainty associated with CMS coverage is a major impediment to further investment in breakthrough technologies. In the ideal future state, participants said that there would be predictability in approval and reimbursement timelines, even when HHS determines it will not approve a technology. They discussed one model that would provide a presumption of coverage for technologies that meet well-defined preliminary requirements. Ultimately, earlier or more certain access to the market could reignite investment and innovation in the device space.

Finally, the group discussed the emergent healthcare applications of artificial intelligence (AI) and the internet of things (IoT). For AI in particular, some participants noted that other countries were out-investing the U.S. which may become a concern as companies seek capital outside of the US. Participants noted that one way to address these capital issues would be to develop an approval and reimbursement process for AI and IoT that provides a clear pathway for innovators and investors to use in seeking to introduce new technologies to the U.S. healthcare market.

The afternoon session began with a lively dialogue about “Consumer Engagement and Empowerment.” CMS’ Paul Mango joined the group for this discussion, sharing the view that the key constraint on consumer empowerment is affordability. He described a future in which consumers shop for their healthcare based on both quality and costs.

The group brainstormed on what matters most to healthcare consumers. Convenience and ease of use of both information and tools were identified as critical - in many instances, more critical than cost. Further, for many services, patients may ignore convenience and cost to shop only on quality. Many patients will seek a specific provider because they want the best care they can get, even if it means driving hours to get there. Nevertheless, there was acknowledgement that cost can be key for many patients. Discussions of cost-reducing innovations were woven in and out of all of the day’s seminars, as participants grappled with how to best drive those opportunities.

Participants made an important distinction during this discussion about the shoppability of services. Consumers should be able to shop for their healthcare across a variety of providers, but patients who have a preference for a long-term specialist may not want to change providers for either lower price or possible improved quality.

Ultimately, this discussion revealed that healthcare consumers and the levers that will drive their behavior cannot be easily categorized. There are a multitude of consumer segments, each with their own priorities and needs. Participants noted that this should be considered when designing a healthcare ecosystem that empowers consumers through different pieces of the puzzle - access, quality, and cost. Participants also noted that government needs to be flexible so that industry can tailor services in the manner that best serves the individual.

To wrap up the day, participants discussed “Transitioning to Value-Based Care.” Demetrios Kouzoukas, Principal Deputy Administrator of CMS and Director of the Center for Medicare, highlighted the lack of clarity around just what everyone means when they talk about “value” in healthcare.

In many ways this topic was a culmination of the others, with several themes from earlier conversations reemerging. The group agreed that the ultimate arbiter of value is the patient, who must be an engaged consumer armed with valuable data and with access to innovations that can meet healthcare needs. It was also agreed that a shift to value-based care can be challenging for many healthcare providers.

“Government could create a guideline that payers and providers draft off of. Even if it needs to be refined; even if that target has to move over time, it’s a starting point.” -Anna Haghgooie, Sandbox Industries

DSIIS participants noted that a key challenge in the current state is the misalignment of incentives among patients, providers, payers and regulators, and that alignment would be helpful in setting the stage for value-based care to become the norm. The group discussed a current lack of care standards to inform the development of quality metrics. A value-based care system will require standards to allow comparison of providers and payers, which in turn will support quality outcomes.

Coming out of the second DSIIS meeting, HHS and participants are energized by the opportunities for continued discussion around the topic areas.

For meeting 3, HHS will draw from the initial DSIIS applicant submission list and use an evaluation process similar to the one used to identify the initial core participants to add subject matter experts and additional stakeholders who can contribute additional perspectives to the four main areas of discussion. Hearing from these additional participants will help to further discussion on the role government plays in accelerating innovation within healthcare.