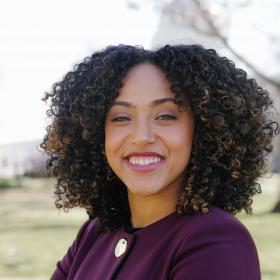 Alexandria Phillips is the Communications Director to Dr. Murthy and drives the Office of the Surgeon General’s messaging and media engagement. The Surgeon General serves as the "Nation's Doctor" providing people in America with the best scientific information available on how to improve their health and reduce the risk of illness and injury, and commands a uniformed service of more than 6,000 public health service officers serving the most underserved and vulnerable populations domestically and abroad. The United States Public Health Service Commissioned Corps – one of the eight uniformed services – is solely committed to protecting, promoting and advancing the nation's health and safety.

Alexandria most recently comes to the Office of the Surgeon General as the Deputy Chief of Staff to Senator Kirsten Gillibrand. She previously served as the Press Secretary for Senator Gillibrand and the Traveling Press Secretary for Gillibrand for President. Additionally, she was the Director of Surrogate Media Affairs for Senator Schumer. Prior to working on the hill, Alexandria was the National Media Booking Manager for Hillary for America in 2015 and 2016. From 2014 to 2015 she served as Policy Officer for Congressional Relations for the US Department of State, Office of Global AIDS / PEPFAR. And previously, she was at The Rockefeller Foundation and the Clinton Global Initiative.