1/  Represents all spending on Medicare benefits by either the Federal Government or other beneficiary premiums.  Includes Medicare Health Information Technology Incentives.
2/  In Part D only, some beneficiary premiums are paid directly to plans and are netted out here because those payments are not paid out of the Trust Funds.
3/  Includes savings from investments in Social Security disability reviews and related benefit payments, including refundable payments made to providers and plans, transfers to Medicaid, and premiums to Medicare Advantage plans paid out of the Trust Funds from beneficiary Social Security withholdings.
4/  Includes CMS Program Management, Health Care Fraud and Abuse Control Program (HCFAC), Quality Improvement Organizations, and other administration.
5/  Includes the following proposed administration in FY 2018: $18 million in outlays for supporting the continuation of four Administration for Community Living programs, and -$16 million in reduced outlays from eliminating the Independent Payment Advisory Board.
6/  Includes non-PAYGO scorecard savings from discretionary HCFAC above savings already assumed in current law.
7/  Removes total Medicare discretionary amount: FY 2016 -$6,174 million; FY 2017 -$7,085 million; and FY 2018 -$6,514 million.

In Fiscal Year (FY) 2018, the Office of the Actuary has estimated that gross current law spending on Medicare benefits will total $704.6 billion.  Medicare will provide health insurance to 60 million individuals who are age 65 or older, disabled, or have end-stage renal disease.

The Four Parts of Medicare

Part A ($202.8 billion gross fee-for-service spending in 2018)
Medicare Part A pays for inpatient hospital, skilled nursing facility, home health related to a hospital stay, and hospice care.  Part A financing comes primarily from a 2.9 percent payroll tax paid by both employees and employers.

Generally, individuals with 40 quarters of Medicare-covered employment are entitled to Part A without paying a premium, but most services require beneficiary coinsurance.  In 2017, beneficiaries pay a $1,316 deductible for a hospital stay of 1–60 days, and $164.50 daily coinsurance for days 21–100 in a skilled nursing facility.

Part B ($201.9 billion gross fee-for-service spending in 2018)
Medicare Part B pays for physician, outpatient hospital, end-stage renal disease, laboratory, durable medical equipment, certain home health, and other medical services.  Part B coverage is voluntary, and about 91 percent of all Medicare beneficiaries are enrolled in Part B.  Approximately 25 percent of Part B costs are financed by beneficiary premiums, with the remaining 75 percent covered by general revenues. 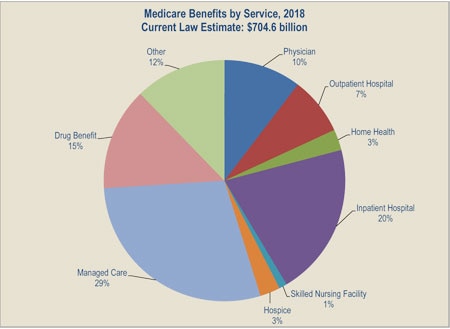 Part C ($203.0 billion gross spending in 2018)
Medicare Part C, the Medicare Advantage Program, pays plans a capitated monthly payment to provide all Part A and B services, and Part D services if offered by the plan.  Plans can offer additional benefits or alternative cost-sharing arrangements that are at least as generous as the standard Parts A and B benefits under traditional Medicare.  In addition to the regular Part B premium, beneficiaries who choose to participate in Part C may pay monthly plan premiums which vary based on the services offered by the plan and the efficiency of the plan.

Part D ($96.8 billion gross spending in 2018)
Medicare Part D offers a standard prescription drug benefit with a 2017 deductible of $400 and an average estimated monthly premium of $35.  Enhanced and alternative benefits are also available with varying deductibles and premiums.  Beneficiaries who choose to participate are responsible for covering a portion of the cost of their prescription drugs.  This portion may vary depending on whether the medication is generic or a brand name and how much the beneficiary has already spent on medications that year.  Low-income beneficiaries are responsible for varying degrees of cost-sharing, with co-payments ranging from $0 to $8.25 in 2017 and low or no monthly premiums.  For 2018, the number of beneficiaries enrolled in Medicare Part D is expected to increase by about 3.5 percent to 45.7 million, including about 12.9 million beneficiaries who receive the low-income subsidy.  In 2017, approximately 57 percent of those with Part D coverage are enrolled in a stand-alone Part D Prescription Drug Plan, 39 percent are enrolled in a Medicare Advantage Prescription Drug Plan, and the remaining beneficiaries are enrolled in an employer plan or the Limited Income Newly Eligible Transition plan.  Overall, approximately 76 percent of all Medicare beneficiaries receive prescription drug coverage through Medicare Part D or employer-sponsored retiree health plans, and approximately another 10 percent though other creditable coverage. 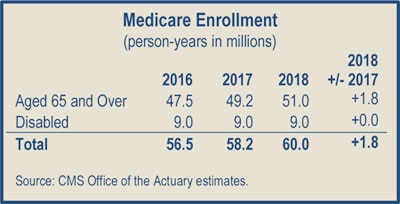 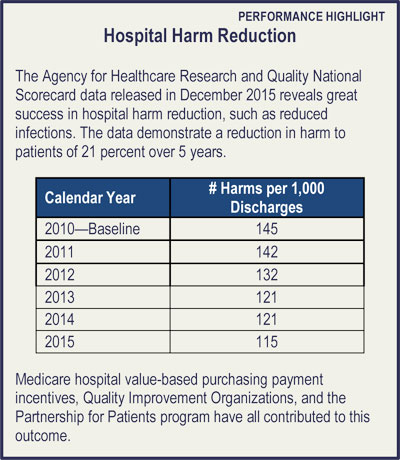 In 2016, more than 4.9 million beneficiaries reached the coverage gap and saved more than $5.6 billion on their medications due to the prescription drug discount program.  These savings averaged about $1,149 per person.

On December 7, 2016, Congress passed the 21st Century Cures Act, which includes a number of key changes to the Medicare program.

These include clarifying that certain hospital outpatient departments should be exempt from site-neutral payment policies and by allowing rural and critical access hospitals to operate under requirements that reflect the realities of their environments and support patients’ access to care.  The 21st Century Cures Act extends the Rural Community Hospital Demonstration by five years.  The Act also provides relief for long-term care hospitals, including through an exception to the current moratorium on new beds, a one-year pause in enforcement of the 25-percent threshold policy, and an exemption for certain clinical services from site-neutral payments.

The Medicare Access and CHIP Reauthorization Act (MACRA) repealed the Sustainable Growth Rate for physician fee schedule payments and created clinician payment provisions that collectively comprise the Quality Payment Program. The Quality Payment Program includes two tracks: the Merit- based Incentive Payment System and incentive payments for participation in Advanced Alternative Payment Models. The goal of the program is to provide the resources and tools clinicians need to provide the best possible care to their patients.

While the program officially began on January 1, 2017, clinicians have the flexibility to start their participation anytime between January 1 and October 2, 2017. HHS envisions the first year as being a trial run for clinicians in order for them to get experience participating in the program and being assessed on their performance. Clinicians ready to fully participate are encouraged to do so and may be eligible for additional bonus payments. HHS will carefully monitor how the first year progresses and, as HHS develops policies for future years, will work to reduce provider burden while providing incentives for providing high-quality care.

The mission of the Quality Improvement Organization Program is to improve the effectiveness, efficiency, economy, and quality of services delivered to Medicare beneficiaries.  The Organizations are experts in the field working to drive local change, which can translate into national quality improvement.  The current five-year contract cycle, or 11th Statement of Work, began on August 1, 2014, and provides approximately $802 million in FY 2018 and $4.4 billion over five years.  The 12th Scope of Work will begin in FY 2019. 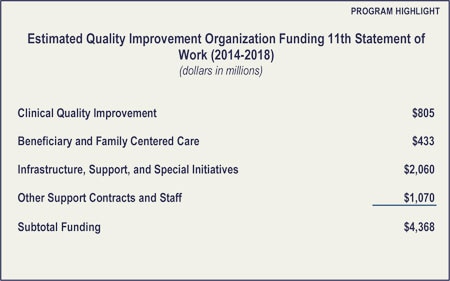 The FY 2018 Budget reflects the President’s commitment to preserve Medicare and does not include direct Medicare cuts.  The Budget repeals the Independent Payment Advisory Board, commits to improving the Medicare appeals process, and supports efforts to limit defensive medicine as a part of a larger medical liability reform effort.

Provide Additional Resources for Medicare Appeals:
This proposal would provide the Department mandatory funding to implement system reforms and invest in addressing the backlog of pending appeals.  The Secretary would be authorized to transfer funding across all levels of the appeals system.  [$1.3 billion in costs over 10 years]

Remand Appeals to the Redetermination Level with the Introduction of New Evidence:  This proposal would remand an appeal to the first level of appeal when new documentary evidence is submitted into the administrative record at the second level of appeal or above.  Exceptions may be made if evidence was provided to the lower level adjudicator but erroneously omitted from the record, or an adjudicator denies an appeal on a new and different basis than earlier determinations.  This proposal incentivizes appellants to include all evidence early in the appeals process and ensures the same record is reviewed and considered at subsequent levels of appeal.  [No budget impact]

Establish Magistrate Adjudication for Claims with Amount in Controversy Below New Administrative Law Judge Amount in Controversy Threshold:  This proposal allows the Office of Medicare Hearings and Appeals to use Medicare magistrates for appealed claims below the Federal District Court amount in controversy threshold ($1,560 in calendar year 2017 and updated annually), reserving Administrative Law Judges for more complex and higher amount in controversy appeals. [No budget impact]

Expedite Procedures for Claims with No Material Fact in Dispute:  This proposal allows the Office of Medicare Hearings and Appeals to issue decisions without holding a hearing if there is no material fact in dispute.  These cases include appeals, for example, in which Medicare does not cover the cost of a particular drug or the Administrative Law Judge cannot find in favor of an appellant due to binding limits on authority.  [No budget impact]

HHS is committed to working with Congress on a comprehensive and common sense reform package to improve the Medicare appeals process and address the pending backlog.

Medical Liability Reform:  The Budget includes a set of proposals for medical liability reform.  This initiative will reduce Federal spending on healthcare, including by curbing the provision of unnecessary services in Medicare.  See the Budget in Brief Overvie Expedite Procedures for Claimsw for proposal descriptions.  [$31.4 billion in Medicare savings over 10 years]