1/ This score reflects the impact on CHIP.  The net Federal cost of the proposal is -$5.8 billion over 10 years, which reflects impacts to CHIP ($13.9 billion) and interactions with Medicaid (-$16.7 billion) and other Federal programs and accounts (-$3.0 billion).  See Medicaid chapter for Medicaid impact.

The Children’s Health Insurance Program (CHIP) was originally created under the Balanced Budget Act of 1997.  In 2009, CHIP was reauthorized under the Children’s Health Insurance Program Reauthorization Act of 2009 (CHIPRA), which provided an additional $44 billion in funding through Fiscal Year (FY) 2013 and created several new initiatives to improve and increase enrollment in the program.  Most recently, the Medicare Access and CHIP Reauthorization Act of 2015 (MACRA) extended funding for the program through FY 2017.  The Budget proposes an additional two-year extension of CHIP, through FY 2019.  Since September 1999, every State, the District of Columbia, and all five Territories have approved CHIP plans.

CHIP is a partnership between the Federal Government and States and Territories to help provide low-income children under age 19 with health insurance coverage so they can access health care.  In general, CHIP reaches children whose families have incomes too high to qualify for Medicaid but too low to afford private health insurance.

States with an approved CHIP plan are eligible to receive an enhanced Federal matching rate, which will range from 65 to 85 percent.  Beginning in FY 2016, and effective through FY 2019, each State’s enhanced Federal matching rate increased by up to 23 percentage points to cover between 88 and 100 percent of total costs for child health care services and program administration, drawn from a capped allotment.

States have a high degree of flexibility in designing their programs.  They can implement CHIP by expanding Medicaid, creating a separate program, or a combination of both approaches.  As of January 1, 2017, there were 14 Medicaid expansion programs, two separate programs, and 40 combination programs among the States, District of Columbia, and Territories.

In FY 2016, the Centers for Medicare & Medicaid Services (CMS) Office of the Actuary estimated that 9.2 million individuals received health insurance funded through CHIP allotments at some point during the year.  Approximately 6.3 million individuals were enrolled in CHIP on average throughout the year.

A Child Enrollment Contingency Fund was established for States that predict a funding shortfall based on higher than expected enrollment.  The Contingency Fund received an initial appropriation of $2.1 billion in FY 2009 and is invested in interest bearing securities of the United States.  Payments from the fund are currently authorized through FY 2017.

Financing
Current law provides an increase in each State’s enhanced Federal match rate by 23 percentage points, not to exceed a total match rate of 100 percent, between FY 2016 and FY 2019.

Improving Quality
CHIPRA provided $225 million over five years for activities that improve child health quality in Medicaid and CHIP, and 18 States (across 10 grants) participated in CHIPRA Quality Demonstrations to test ways to strengthen the quality of and access to children’s health care through a variety of health care delivery and measurement approaches at both the provider and patient levels.  The Protecting Access to Medicare Act of 2014 allocates $15 million of Adult Health Quality funding for the pediatric quality measures program, and MACRA provided an additional $20 million in new funding for the program. 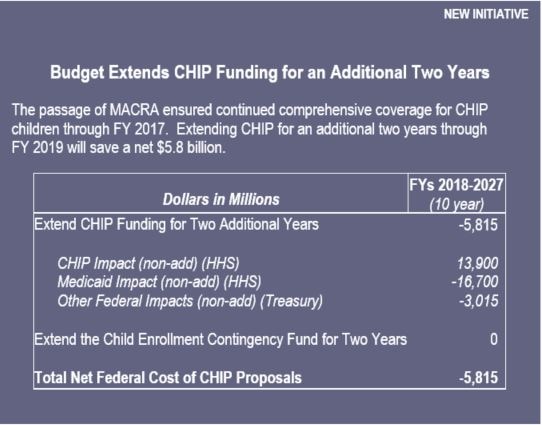 Extend CHIP Funding through FY 2019
The Budget proposes to extend funding for CHIP for two additional years through FY 2019.  Extending CHIP funding for two years provides stability to States and families while the future of the program is addressed alongside other health reforms.  The Budget also proposes a series of improvements that rebalance the State-Federal partnership and increase State flexibility.  This proposal also extends the Child Enrollment Contingency Fund through FY 2019.

This proposal ends the 23 percentage point increase in the enhanced Federal match rate and the current law maintenance of effort requirement after FY 2017.
This funding extension would also cap the level at which States could receive the CHIP enhanced Federal matching rate at 250 percent of the Federal Poverty Level.  These provisions would return the focus of CHIP to the most vulnerable and low-income children.

Under current law, States were required to transition children ages 6 to 18 in families with incomes between 100 and 133 percent of the Federal Poverty Level off of CHIP to Medicaid.  The Budget proposes allowing States to move these children back into CHIP.

Without Congressional action, CMS estimates States will begin to experience funding shortfalls in December 2017 and all States will run out of funding before the end of FY 2018.

1/  This score reflects the impact on CHIP.  The net Federal cost of the proposal is -$5.8 billion over 10 years, which reflects impacts to CHIP ($13.9 billion) and interactions with Medicaid (-$16.7 billion) and other Federal programs and accounts (-$3.0 billion).
2/  Totals may not add due to rounding.