1/ The Affordable Care Act appropriates such sums as necessary for the Secretary to award grants to states for certain activities to fund their Marketplaces. The final grants were awarded in December 2014. Obligations in FY 2016 and beyond are limited to administrative costs.

2/ No new loan awards have been made since 2014, outlays reflect funds obligated prior to 2015.

3/ Outlay amounts for Transitional Reinsurance and Risk Adjustment reflect sequestration of 6.8 percent in FY 2016, and that sequestered amounts become available in the following fiscal year.

Note: Totals may not add due to rounding.

The Affordable Care Act is making comprehensive health insurance coverage available to millions of Americans who previously lacked access to or could not afford health insurance.  As the Affordable Care Act’s provisions have taken effect, 17.6 million Americans have gained coverage.  Since 2010, the uninsured rate in this country has fallen by nearly 45 percent, the largest reduction in decades.

Currently, 16 states and the District of Columbia operate State-based Marketplaces.  Four of these State-based Marketplaces utilize the federal platform for eligibility and enrollment functionality.  Additionally, seven states partner with HHS to operate some functions in State Partnership Marketplaces.  HHS is operating Federally-facilitated Marketplaces in the remaining 27 states.  In addition to enrolling individuals, Marketplaces also determine eligibility for advance payment of the premium tax credits and cost‑sharing reductions, or Medicaid and CHIP in some states; ensure health plans meet certain standards; operate a call center and website to provide consumer assistance; and assist individuals in locating and obtaining affordable health coverage.

The Affordable Care Act provided grant funding to enable states to plan for and establish Marketplaces.  The final round of grants was awarded to states in December 2014. Overall, 37 states and the District of Columbia have received approximately $5.4 billion in grants to plan, establish, and build Marketplace functionality since 2011.  States may request No Cost Extensions to extend their project periods to complete approved establishment activities, but ongoing operations are self-funded through user fees or other funding.

The Affordable Care Act included a state option to provide health benefits coverage to certain low-income individuals otherwise eligible for financial assistance through the Marketplaces, improving continuity of care for people whose income fluctuates above and below Medicaid and Children’s Health Insurance Program levels. Minnesota was the first state to establish a Basic Health Program with coverage beginning in January 2015, and New York soon followed in April 2015. Estimated outlays for FY 2017 are $2.6 billion, reflecting 95 percent of amounts that would have been spent on premium tax credits and cost‑sharing reductions if individuals were enrolled in Marketplace coverage. These outlays are reflected in Treasury Budget documents along with the premium tax credit and cost‑sharing reduction estimates. 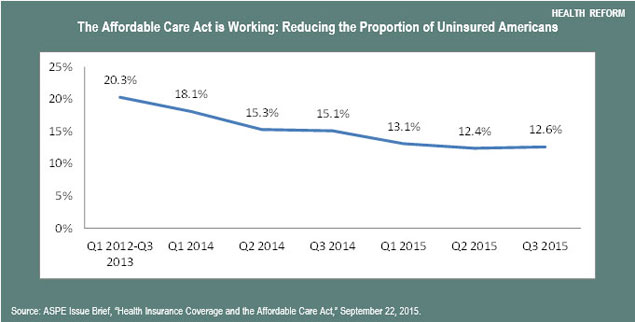 The CO-OP loan program fosters the creation of new, private, qualified nonprofit, member-governed health insurance issuers to spur competition by offering qualified health plans in the individual and small group markets in the states in which the issuers are licensed.  The Affordable Care Act required that any profits a CO-OP makes must be used to lower premiums, improve benefits, or improve the quality of health care delivered to plan members.

CO-OP loan awards to date total $2.5 billion. No new funding has been awarded since December 2014.  Currently, 11 CO-OP loan recipients are licensed and have enrolled members in 13 states for 2016; the Montana CO-OP also offers coverage in Idaho and the Massachusetts and Maine CO-OPs both offer coverage in New Hampshire.  At the end of 2015, 12 CO-OPs ceased operations due to lack of access to adequate capital, as well as other operational issues that most health plans face entering new markets.  CMS helped consumers in these CO-OPs find new coverage in the Marketplaces for 2016. Once the wind-down process for these CO-OPs is complete, CMS will use every available tool to recoup federal funding, based on applicable law and loan agreements.

The Affordable Care Act originally appropriated $6 billion for the program. A series of congressional rescissions totaling $4.9 billion left $253 million in a contingency fund for oversight and assistance to existing loan entities, of which less than $10 million remains.  The remaining balance will be exhausted by the end FY 2016.

The Affordable Care Act included two temporary and one permanent program to mitigate volatility of insurance premiums in the individual and small group markets beginning in 2014 when Marketplaces and new market rules took effect. Transfers from these programs first occurred in 2015 for costs related to the 2014 plan year.

The transitional reinsurance program provides protection to plans in the individual market when enrollees experience high claims costs for plan years 2014 through 2016. For plan year 2014, CMS collected $8.9 billion and made payments of $7.9 billion reflecting 100 percent of issuer costs for enrollees with medical expenses between $45,000 and $250,000. Remaining collection balances will be used to increase payments for plan years 2015 and 2016. In these years, the reinsurance collections decrease based on targets set in the Affordable Care Act, reflecting a transition to a more stable individual insurance market.

The temporary risk corridors program adjusts for uncertainty in rate setting in qualified health plans in the individual and small group markets from 2014 through 2016 through shared risk in losses and gains.  Payments for the risk corridor program calculated for program year 2014 exceeded collections. In the event of a shortfall over the life of the three-year risk corridors program, the Administration will work with Congress to provide necessary funds for outstanding payments.

The permanent risk adjustment program transfers funds from plans with relatively lower risk enrollees to plans with relatively higher risk enrollees to protect against the potential effects of adverse selection inside and outside the Marketplaces.  Results of the first year of the program indicate that it is working as intended. Plans that covered disproportionate shares of high need populations (e.g., persons with HIV/AIDS) and small plans with isolated cases of catastrophic illness received risk adjustment payments. Over 750 issuers nationwide participated in risk adjustment for plan year 2014, with approximately $2.4 billion in charges funding risk adjustment payments for that year.

In addition, non-grandfathered plans may no longer deny coverage or charge more based on a person’s health status, gender, or any factors outside of age, tobacco use, family size, and geography. That provision means women can never be required to pay higher premiums just because they are women.  Further, the law limits the amount these issuers can vary premiums based on tobacco use and age.  This protection means that under these plans, nobody has to worry that they will lose their insurance, or have to pay more, just because they have a pre-existing condition or if they get sick.

A number of consumer protections in the Affordable Care Act were already in effect prior to 2014.  For example, approximately 5.5 million young adults gained coverage since 2010 in part by being able to stay on their parents’ health plans until age 26. 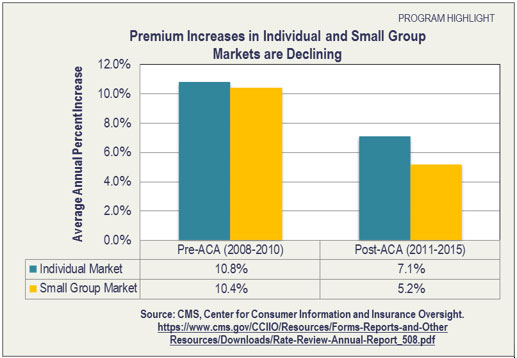 The law also put a ban on lifetime benefit limits, ensuring that patients can use their insurance coverage when they are sick and need it most.  In addition, 137 million Americans now have access to preventive services without cost sharing such as copays or deductibles, including colonoscopy screenings, Pap smears and mammograms for women, well child visits, and flu shots for all children and adults.  Moreover, the Affordable Care Act builds on the Mental Health Parity and Addiction Equity Act of 2008 to extend federal mental health parity protections to 60 million Americans.

The Affordable Care Act required private insurers in the individual and small group market to spend at least 80 percent of collected premium revenue on clinical expenses and quality improvement.  This requirement is 85 percent for the large group market.  Insurers who do not abide by this requirement must issue rebates to consumers.  In 2014, consumers received $469 million in rebates, or an average rebate of $129 per family, through this provision, and consumers received additional value through lower premiums overall.

Private insurers must submit to relevant state offices or HHS justification for any premium increase of 10 percent or more prior to implementation of the increase.  This information is then made publicly available, increasing transparency for consumers.  In 2015, the rate review provision alone saved 6.5 million consumers approximately $1.5 billion.

In 2010 through 2014, HHS awarded nearly $250 million to states and the District of Columbia to support their premium rate review programs.  These grants supported the hiring of new staff, improved communication with consumers about rate review, the creation of data centers that analyze health costs, and the enhancement of existing infrastructure required to operate an effective rate review program.  In FY 2016, HHS will use the remaining funds to support state implementation of consumer protections and insurance reforms.

Provide a Consistent Definition of “Indian” in the Affordable Care Act

Currently, the Affordable Care Act includes different definitions of “Indian” when outlining eligibility requirements for certain coverage provisions. These definitions are not consistent with eligibility requirements used for delivery of other federally‑supported health services to American Indians and Alaska Natives under Medicaid, the Children’s Health Insurance Program, and the Indian Health Service. The Budget proposes to standardize Affordable Care Act definitions to ensure all American Indians and Alaska Natives will be treated equally with respect to the Act’s coverage provisions, including access to qualified health plans with no cost‑sharing. [$520 million in costs to Treasury over 10 years; no HHS budget impact]

The Budget would provide CMS with access to the National Directory of New Hires, a database maintained by the Administration for Children and Families, to assist with the eligibility determination and verification process for financial assistance in the Marketplace. To determine eligibility for, and the value of, advance payments of the premium tax credit, CMS currently relies on income tax data, Social Security data, and a commercial source of income data.  Access to the NDNH data would provide another  source for income information. Please reference the Administration for Children and Families section for a complete description of the Administration’s proposal. [No Budget Impact]

The current lack of standardization and transparency for medical billing documents creates variability in the complexity, format, and comprehensiveness of information consumers receive about payments owed for medical care.  This proposal allows HHS to establish uniform definitions and principles for transparency and information standardization that group and individual market issuers can adapt for their medical billing documents. Further refinements to these standards and principles could be made over time as necessary. The proposal will improve consumer readability and understanding of charges associated with health care services received. [No budget impact]

Some patients incur surprise out-of-network charges when they receive health care services at an in‑network hospital. These surprise charges arise because, while the hospital is in-network, certain physicians who provide services to the patient during the episode of care are not part of the network. Therefore, the provider often charges patients the out‑of-network cost sharing and bills the consumer for any unpaid balances for those specific services. This proposal requires hospitals and physicians to work together to ensure that patients receiving treatment at in-network facilities do not face unexpected out-of-network charges from out-of-network practitioners that cannot be avoided by the patient. Hospitals would have to take reasonable steps to match individual patients with providers that are considered in-network for their plan.  Furthermore, all physicians who regularly provide services in hospitals would be required to accept an appropriate in-network rate as payment-in-full. Thus, if the hospital failed to match a patient to an in-network provider, the patient would still be protected from surprise out-of-network charges. [No budget impact]

This proposal restricts non-federal government health plans from opting out of four Public Health Service Act provisions: Mental Health Parity and Addiction Equity Act, Newborns’ and Mother’s Health Protection Act, Women’s Health and Cancer Rights Act, and Michelle’s Law.  Many self-insured non-federal government plans have submitted opt-out requests to HHS for these provisions, which deprives state and municipal employees of protections that are afforded to employees in the private sector. [No budget impact]

1/ The score reflects the impact on U.S. Department of Treasury.