The mission of the National Institutes of Health is to seek fundamental knowledge about the nature and behavior of living systems and the application of that knowledge to enhance health, lengthen life, and reduce illness and disability.

The FY 2015 Budget requests $30.4 billion for the National Institutes of Health (NIH), an increase of $211 million, or 0.7 percent, over FY 2014, reflecting the Administration’s priority to invest in innovative biomedical and behavioral research that advances medical science while stimulating economic growth. In FY 2015, NIH estimates it will support a total of 34,197 research project grants, including 9,326 new and competing awards.

NIH serves as the nation’s medical research agency and is the largest source of funding for biomedical and behavioral research in the world. NIH’s budget is composed of 27 appropriations for its Institutes and Centers, Office of the Director, and Buildings and Facilities. In FY 2015, about 83 percent of the funds appropriated to NIH will flow out to the extramural community, which supports work by more than 300,000 research personnel at over 2,500 organizations, including universities, medical schools, hospitals, and other research facilities. About

11 percent of the budget will support an in-house, or intramural, program of basic and clinical research and training activities managed by world class physicians and scientists. This intramural research program, which includes the NIH Clinical Center, gives the nation the unparalleled ability to respond immediately to national and global health challenges. Another six percent will provide for agency leadership, research management and support, and facilities maintenance and improvements.

In fulfilling its mission, NIH strives to maintain a diverse portfolio of research founded on both public health need and scientific opportunity. In FY 2015, with the $30.4 billion requested, NIH will focus on generating the basic science findings of today to fuel tomorrow’s breakthroughs in health. At the same time, NIH will continue its investment in translating basic discoveries into improvements in public health, including the delivery of more effective health care. This robust research enterprise depends upon NIH’s continued innovation as it seeks to recruit and retain diverse scientific talent and creativity.

Investing in Today’s Basic Science for Tomorrow’s Breakthroughs: Approximately 54 percent of the NIH research budget is devoted to basic biomedical and behavioral research that makes it possible to understand the causes of disease onset and progression. As an example, in FY 2015, NIH plans to spend $100 million to expand its investment in the Brain Research through Advancing Innovative Neurotechnologies (BRAIN) Initiative. This project will develop and apply new tools to map the circuits of the brain, measure the dynamic patterns of activity within those circuits, and understand how they create unique cognitive and behavioral capabilities. Ultimately, this fundamental knowledge will be applied to revolutionize our understanding of complex brain functions and their links to behavior and disease.

NIH in the President’s Opportunity, Growth, and Security Initiative

Included in the proposed Opportunity, Growth, and Security Initiative to support the President’s priorities to grow the economy and create opportunities are $970 million to bring NIH to a total level of $31.3 billion in FY 2015. These funds would be used to increase the number of new grants funded and provide additional resources for signature activities such as the BRAIN Initiative, improving the sharing and analysis of complex biomedical data sets, expanding research on Alzheimer’s disease and vaccine development, further accelerating partnership efforts to identify and develop new therapeutic drug targets, and other innovative projects.

Taking Advantage of Big Opportunities in Big Data: Technological advances have fueled the generation of increasingly larger and more complex biomedical data sets, such as high-resolution medical images, recorded physiological signals, and complete DNA sequences of large numbers of individuals. In FY 2015, NIH’s Big Data to Knowledge program will work to facilitate sharing and protection of data among researchers across the nation, develop faster and more accurate analytical methods, and establish Centers of Excellence to help solve the most intractable Big Data problems to deepen our understanding of disease and speed translation of new treatments.

Investing in Precision Medicine: Recent insights into the molecular basis of disease have identified many promising new targets for therapeutic intervention. NIH is also focusing on research to tailor treatments to the individual characteristics of each patient, also known as “precision medicine.” By better understanding human variability and susceptibility, NIH seeks to develop specific preventive and therapeutic interventions that can avoid needless treatment and expense for those who will not benefit. In FY 2015, the National Center for Advancing Translational Sciences (NCATS) will continue efforts to re-engineer the process of translating scientific discoveries into new diagnostics and therapeutics, working with partners in industry, academia, and other government agencies, such as the Food and Drug Administration and the Defense Advanced Research Projects Agency (DARPA). Within NCATS, the Budget proposes $30 million, an increase of $20 million over FY 2014, for the Cures Acceleration Network to accelerate the development of “high need cures” by reducing barriers between research discovery and clinical trials.

NIH manages a program, Tox21, to investigate and catalog the health effects of many of the estimated 125,000 man-made chemicals in use commercially. NIH collaborated with the EPA and the FDA on this program to research and develop innovative test methods that characterize how chemicals interact with cellular pathways, determining chemical toxicity, as well as danger to human health. The results of these tests are important for developing prevention or mitigation strategies. NIH exceeded expectations in FY 2013 by completing 33 quantitative high-throughput screen assays on the over 10,000 compounds in the Tox21 library.

Nurturing Talent and Innovation: A diverse, well trained, and highly creative workforce is an important part of the biomedical research endeavor and is essential for developing new scientific insights and translating these insights into improved health outcomes. In FY 2015, to encourage exceptionally promising new investigators and to speed the transition of talented trainees to independent researcher positions, NIH will continue to emphasize programs such as the NIH Director’s Early Independence Award, Transformative Research Award, and New Innovator Award, as well as the Pathway to Independence Award. NIH will also place additional emphasis on research innovation in FY 2015 by increasing investment in a variety of High-Risk High Reward projects by the Institutes and Centers to $100 million, and through a $30 million investment in Common Fund projects modeled after the research flexibilities utilized by DARPA.

NIH will also continue to implement a series of steps to enhance its effort to recruit and advance the careers of people traditionally underrepresented in the biomedical and behavioral research workforce. Such steps include providing relatively under resourced institutions with opportunities to provide mentorship and resources to undergraduate students interested in pursuing a biomedical research career. Other efforts include building a nationwide consortium that will connect students, postdoctoral fellows, and faculty to experienced mentors, and improving upon data collection and evaluation efforts to determine the most effective approaches.

A total of $767 million is estimated in FY 2015 to support training 15,715 of the next generation of research scientists through the Ruth L. Kirschstein National Research Service Awards program. The Budget proposes a two percent stipend increase for predoctoral and postdoctoral trainees in FY 2015.

HIV/AIDS: NIH estimates it will devote more than $3 billion for research on HIV/AIDS in FY 2015. With newly discovered ways of identifying and treating HIV infection and preventing HIV transmission, coupled with the promise of safe, effective, and affordable vaccines, the world can, for the first time, imagine achieving an AIDS-free generation.

On April 2, 2013, President Obama launched the Brain Research through Advancing Innovative Neurotechnologies (BRAIN) Initiative to “accelerate the development and application of new technologies that will enable researchers to produce dynamic pictures of the brain that show how individual brain cells and complex neural circuits interact at the speed of thought.” A working group of advisors to the NIH Director produced a report in September 2013 that identified high priority research areas for initial NIH funding. These include:

The knowledge gained from this initiative will help answer fundamental questions about the complex links between brain function and behavior. Three government agencies, NIH, the National Science Foundation, and DARPA, plan to spend a total of $200 million in FY 2015 on the BRAIN Initiative. NIH’s $100 million contribution, an increase of roughly $60 million above FY 2014, is in addition to the $5.5 billion estimated in the NIH FY 2015 budget for neuroscience research.

Alzheimer’s Disease: NIH is continuing to implement the research components of the National Plan to Address Alzheimer’s Disease (AD), a roadmap to assist in meeting the goal to prevent and effectively treat AD by 2025. NIH estimates it will spend $566 million on AD research in FY 2015. NIH continues to invest in a broad spectrum of basic and translational research activities to combat Alzheimer’s disease. For example,

NIH has recently established the AD Genetics Warehouse to identify further genetic risk and protective factors. Scientists supported by the AD Neuroimaging Initiative have analyzed thousands of human brain scans, genetic profiles, and biomarkers in order to better detect AD in its earliest stages. More than 35 NIH-funded clinical trials are underway, and more than 40 compounds are being tested as potential preventive and therapeutic interventions for Alzheimer’s and cognitive decline.

Research Project Grants: NIH estimates that it will devote $16.2 billion, or 53 percent of its total budget, to finance a total of 34,197 competitive, peer reviewed, and largely investigator-initiated research project grants (RPGs) in FY 2015. Within this total, NIH anticipates supporting 9,326 new and competing RPGs, an increase of 329 grants over FY 2014 levels.

Science, Technology, Engineering, and Mathematics (STEM) Education: The FY 2015 Budget will propose a modified version of a major reorganization of government-wide STEM programs. Led by the Department of Education and the National Science Foundation, the STEM reorganization will create core initiatives focused on improving K 12 instruction, reforming undergraduate education, consolidating the administration of fellowships to better meet national STEM goals, and supporting programs to engage the public, students, and teachers in STEM education.

A total of $137 million is requested for NIH intramural Buildings and Facilities (B&F) in FY 2015, roughly the same level as in FY 2014, to sustain and improve the physical infrastructure used to carry out quality biomedical research on the NIH campuses.

In FY 2015, NIH will devote $78 million of its B&F resources as a one-time expense to expand the chilled water capacity on the Bethesda campus in order to improve the reliability of this critical campus-wide utility for cooling. Most of the remaining funds will be used for facility repairs and improvements. The B&F mechanism total also includes $8 million requested within the National Cancer Institute budget for facilities repair and improvement projects at its Frederick, Maryland campus. 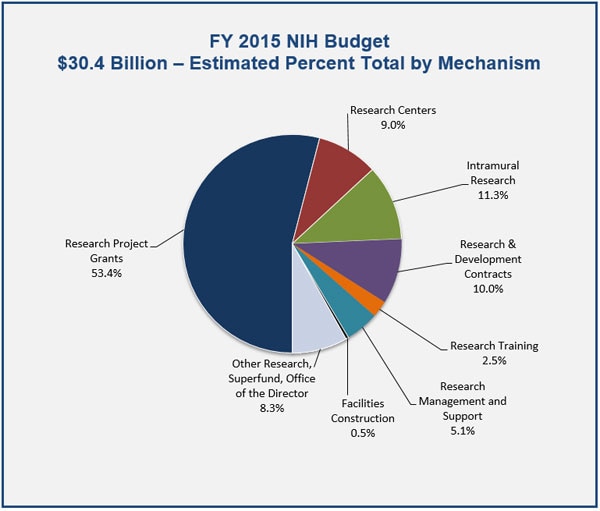 1/ The amounts in the FY 2014 column take into account funding reallocations, and therefore may not add to the total budget authority reflected herein.