All adults are now eligible for a COVID-19 booster shot. Learn more

3/ Does not include Deficit Reduction Act funding for the Medicaid Integrity Program, which is discussed in this chapter but is in the State Grants and Demonstrations account.

The FY 2015 Budget supports fraud prevention and the reduction of improper payments, which are top priorities of the Administration. For FY 2015, the Budget invests a total of $428 million in new Health Care Fraud and Abuse Control Program (HCFAC) and Medicaid program integrity funds. Together the program integrity investments in the Budget will yield $13.5 billion in gross savings for Medicare and Medicaid over 10 years. The Budget also proposes legislative changes to give HHS important new tools to enhance program integrity oversight; cut fraud, waste, and abuse in Medicare, Medicaid, and Children’s Health Insurance Program (CHIP); and generate an additional $1 billion in program savings over 10 years.

The Budget includes $697 million in HCFAC program funding in FY 2015, $294 million in base discretionary funding, $25 million in new discretionary funding, and $378 million in proposed new mandatory funding. Starting in FY 2016, the Budget requests all additional HCFAC funds as mandatory, instead of through the discretionary cap adjustment included in the Budget Control Act (BCA). This approach will provide a dedicated, dependable source of additional resources to perform program integrity activities and make certain that only accurate payments are made to legitimate providers for appropriate services for eligible beneficiaries. All proposed HCFAC program investments, including gradual growth over time, are consistent with BCA levels.

The $1.3 billion in mandatory base funds for FY 2015 are financed from the Medicare Part A Trust Fund.

This funding is allocated to the Medicare Integrity Program (MIP) and the HCFAC Account, which is divided annually among the HHS Office of Inspector General (OIG), other HHS agencies, and law enforcement partners at the Department of Justice (DOJ) and the Federal Bureau of Investigation.

PROGRAM HIGHLIGHT -- Power Mobility Devices (PMD) Prior Authorization Demonstration
CMS implemented a Prior Authorization process for scooters and power wheelchairs in seven states with high populations of fraud- and error-prone providers (CA, IL, MI, NY, NC, FL and TX) starting in 2012. This demonstration is an approach drawn from the private sector, and is designed to ensure that Medicare only pays for PMDs that meet longstanding coverage guidelines, thereby reducing improper payments and reducing fraud, waste and abuse.

In September 2013 CMS released positive findings for the first year of implementation. Based on the initial report, in 2012 Medicare PMD expenditures per month dropped significantly in demonstration states and non-demonstration states. Additionally, CMS reported positive feedback on prior authorization from the industry because it helps reduce subjecting providers and suppliers to future post-pay audits and ensures a predictable cash flow related to billing. Finally, in the first year of implementation there were zero beneficiary complaints about the process.

The Budget proposes to expand prior authorization not only to PMD services but also to certain high risk Medicare fee-for-service categories.

The HCFAC investment supports efforts to reduce the Medicare fee for service improper payment rate and initiatives of the joint HHS DOJ Health Care Fraud Prevention and Enforcement Action Team task force, including Strike Force teams in cities where intelligence and data analysis indicate high levels of fraud, and the Health Care Fraud Prevention Partnership between the federal government, private insurers, and other stakeholders. CMS will also make further investments in innovative prevention initiatives, such as the Fraud Prevention System that analyzes all Medicare FFS claims using sophisticated algorithms to identify suspicious behavior. In FY 2015 and beyond, CMS will continuously refine these technologies to better combat fraud, waste, and abuse in Medicare, Medicaid, and CHIP. Finally, these funds will support more rigorous data analysis and an increased focus on civil fraud, such as off label marketing and pharmaceutical fraud.

Return on Investment: Programs supported by HCFAC mandatory funds have a proven record of returning more money to the Medicare Trust Funds than the dollars spent.

The 3 year rolling average return on investment for HCFAC law enforcement activities is a record 8.1 to 1. From 1997 to 2013, programs supported by HCFAC have returned over $25.9 billion to the Medicare Trust Funds. In FY 2013 alone, $4.3 billion was recovered, including $2.85 billion returned to the Medicare Trust Funds and $576 million in federal Medicaid recoveries returned to the Treasury. CMS actuaries conservatively project that for every new dollar spent by HHS to combat health care fraud; about $1.50 is saved or avoided. Based on these projections, the $697 million in additional HCFAC funding, as part of a multi year HCFAC investment included in the Budget, will yield additional Medicare and Medicaid savings of $7.4 billion over 10 years. Further, the HCFAC return-on-investment demonstrates that in recent years the actual recoveries from HCFAC law enforcement efforts have far exceeded the projected savings.

The Affordable Care Act includes an additional $350 million in program integrity resources over 10 years, plus an inflation adjustment. It provides unprecedented tools to CMS and law enforcement to protect Medicare, Medicaid, and CHIP from fraud, waste, and abuse. (See “Program Integrity Enhancements Authorized by the Affordable Care Act” for further details.) These program integrity tools fight fraud and safeguard taxpayer dollars while ensuring patient access to care is not interrupted.

In 2013, CMS completed its second year of full implementation of the Fraud Prevention System (FPS), marking a significant shift from a pay and chase model to a prevention approach using technology similar to the credit card industry. The FPS screens all Medicare Part A and Part B, including Durable Medical Equipment (DME), claims using a series of predictive models to identify suspicious billing activity and emerging fraud trends. The system prioritizes leads for CMS’s program integrity contractors to investigate and determine whether to stop payment or make a referral to law enforcement.

The Medicare Fraud Strike Force is a partnership between HHS and DOJ in nine health care fraud hot spots around the country. Strike Force teams use advanced data analysis techniques to identify high billing levels so that interagency teams can target emerging or migrating schemes and chronic fraud by criminals masquerading as health care providers or suppliers.

The Medicaid Integrity Program was established by the Deficit Reduction Act of 2005, which appropriated $75 million in FY 2009 and for each year thereafter. The Affordable Care Act later increased appropriations for FY 2011 and future years by inflation.

States have the primary responsibility for combating fraud, waste, and abuse in the Medicaid program, but the Medicaid Integrity Program plays an important role supporting state efforts, including through contracting with eligible entities to carry out activities including reviews, audits, identification of overpayments, education activities, and technical support to states. The Medicaid Integrity Program works in coordination with Medicaid program integrity activities funded through the HCFAC program. This program includes a collaborative effort across CMS to transform the Medicaid data enterprise through the Medicaid and CHIP Business Information and Solutions program.

Allow Prior Authorization for Medicare Fee-for-service Items: Currently, CMS has authority to require prior authorization for Medicare DME service items. This proposal would extend that authority to all Medicare fee-for-service items, particularly those service items that are at the highest risk for improper payment. By allowing prior authorization on additional items, CMS can ensure in advance that the correct payment goes to the right provider for the appropriate service, and prevent future Recovery Audit Contractor audits on those payments. In addition, this proposal would require the Secretary to implement prior authorization in two service areas: power mobility devices and advanced imaging. [$90 million in savings over 10 years]

Allow Civil Monetary Penalties for Providers and Suppliers who Fail to Update Enrollment Records: Currently, providers and suppliers are required to update enrollment records to remain in compliance with the Medicare program. This proposal would allow penalties if providers and suppliers fail to update their records, give them an additional incentive to report up to date information (such as adverse legal actions), and help reduce program vulnerability to fraud. [$90 million in savings over 10 years]

Allow the Secretary to Create a System to Validate Practitioners’ Orders for Certain High Risk Items and Services: Many current systems for ordering services lack mechanisms to determine whether the service is medically necessary or if the patient has seen a practitioner. An electronic Medicare claims ordering system could result in significant savings by preventing improper payments. [No budget impact]

Increase Scrutiny of Providers using Higher Risk Banking Arrangements to Receive Medicare Payments: This proposal would require providers to report the use of sweep accounts that immediately transfer funds from a financial account to an investment account in another jurisdiction preventing Medicare from recovering improper payments, and permit enhanced review of reporting providers. [No budget impact]

Retain a Percentage of Incentive Reward Payment Recoveries: Under an incentive reward program individuals and beneficiaries reporting incidences of fraud, waste, and abuse are eligible to receive a percentage of the Medicare recoveries yielded from the tip up to $1000 reward. This proposal would work in conjunction with a proposed CMS rule expanding the program to allow CMS to retain a percentage of the recovery to administer the program. [No budget impact]

Expand Medicaid Fraud Control Unit Review to Additional Care Settings: The Budget proposes to allow Medicaid Fraud Control Units to receive federal matching funds for the investigation or prosecution of abuse and neglect in non-institutional settings, such as home-based care—in which a beneficiary may be harmed in the course of receiving health care services. The current limitation on federal matching was logical when the program was established in 1978, at a time when Medicaid services were typically provided in an institutional setting, but has become outmoded as the delivery and payment for health services has increasingly shifted to in-home and community based settings. [No budget impact]

Prevent Use of Federal Funds to Pay State Share of Medicaid or CHIP: Federal regulations prohibit federal funds from being used as the state share for Medicaid unless authorized in federal law. By codifying this principle in statute, this proposal would prevent states from using federal funds to pay the state share of Medicaid or CHIP, unless specifically authorized under law. [No budget impact] 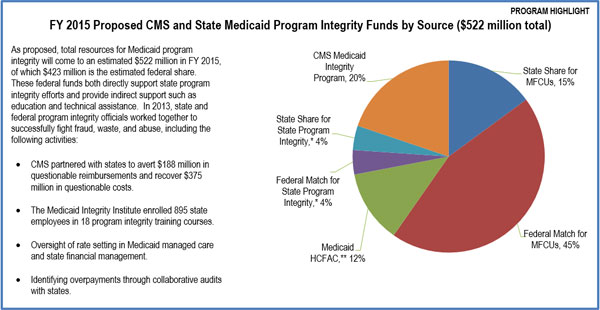 Retain a Portion of Recovery Audit Contractor Recoveries to Implement Actions That Prevent Fraud and Abuse: Under current law, CMS can use the recovered funds from the Recovery Audit Contractor program to administer the program but cannot use these funds to implement corrective actions, such as new processing edits and provider education and training, to prevent future improper payments. This proposal addresses this funding restriction. [$250 million in savings over 10 years]