Note: Totals may not add due to rounding.

1/ The Affordable Care Act appropriates such sums as necessary for the Secretary to award grants to states for certain activities to fund their Marketplaces.

The Affordable Care Act provides vital new protections for consumers receiving or shopping for private health insurance. New reforms ensured that essential care will become a standard part of most private health insurance plans, and that consumers can continue to rely upon their insurance when they become ill. Consumers are able to purchase more efficient coverage due to rate review and medical loss ratio protections. Furthermore, millions of Americans now have access to affordable coverage as a result of the Health Insurance Marketplaces which began enrollment and operations in 2013.

Seventeen states and the District of Columbia began full operations of their Marketplaces on January 1, 2014. Kentucky is among these states, creating its State-based Marketplace called kynect on July 17, 2012. With nearly 15 percent of the state’s population, or nearly 1 in 6 residents, considered to be uninsured, Kentucky sought to improve health outcomes for its residents by offering more affordable insurance coverage options through the establishment of kynect /1. Over 33,000 individuals of the state’s estimated 640,000 uninsured individuals have enrolled in qualified health plans through kynect as of December 28, 2013.

State Work to Implement Marketplaces: In 2014, 17 states and the District of Columbia began operations of their Marketplaces, and seven are currently conditionally-approved to partner with HHS. HHS has begun operating the Federally-facilitated Marketplace (FFM) in the remaining states that chose not to implement their own Marketplace in 2014. In some cases, states may partner with HHS to operate some functions in a State Partnership Marketplace. In addition to enrolling individuals, Marketplaces also determine eligibility for premium tax credits and cost sharing reductions, or Medicaid and CHIP in some states; ensure health plans meet certain standards; operate a hotline and website to provide consumer assistance; and assist individuals in locating and obtaining affordable health coverage. States and non-profit organizations also help individuals to understand their new rights under the Affordable Care Act and learn how to navigate the healthcare system. States with Federally-facilitated or State Partnership Marketplaces may continue implementation activities in 2014, working toward establishment of State based Marketplaces in future years.

CMS is also moving forward with making the Basic Health Plan Program available to states as another option to expand coverage. 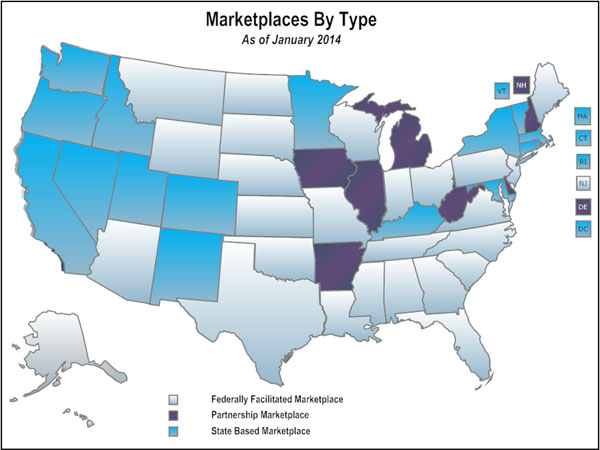 Marketplace Establishment Grants: The Affordable Care Act provides grant funding in the initial years of establishment to enable states to plan for and establish Marketplaces. As of January 2014, 37 states and the District of Columbia had received over $4.9 billion in grants to operate Marketplaces since 2011. States may use Establishment grants to fund their start-up costs, whether for State based or State Partnership Marketplace functions, or to support the FFM. Marketplace grants fund the first operational year of activities when system testing and process development will still be underway, and after their initial establishment, Marketplaces will be self-funded through user fees or other funding to support ongoing operations. So far, 14 states and the District of Columbia have received Level II Establishment funding to establish a State based Marketplace, and grants will continue to be awarded through December 2014 to states working toward establishing State based Marketplaces in future years.

Advance Payments of Premium Tax Credits and Cost-Sharing Reductions: Individuals who enroll in qualified health plans through the Marketplaces may qualify for insurance affordability programs to decrease their premium costs and have their out-of-pocket health care costs reduced. CMS makes advance payments of the premium tax credit to issuers each month on behalf of qualifying individuals with income between 100 and 400 percent of the federal poverty level (FPL). Individuals with income below 250 percent of FPL, and American Indians/Alaska Natives with income below 300 percent FPL, may also qualify for lower deductibles, coinsurance, co-pays and out-of-pocket limits, and CMS reimburses Marketplace issuers for these cost-sharing reductions. These payments are funded by the Department of Treasury and are therefore not part of HHS’ budget.

In addition, non-grandfathered plans may no longer deny coverage or charge more based on a person’s health status, gender, or any factors outside of age, tobacco use, family size, and geography. That provision means women can never be required to pay higher premiums just because they are women. Further, the law limits the amount these issuers can vary premiums based on tobacco use and age. This protection means that under these plans, nobody has to worry that they will lose their insurance, or have to pay more, just because they have a pre-existing condition or if they get sick.

A number of consumer protections in the Affordable Care Act were already in effect prior to 2014. For example, more than 3 million young adults have gained coverage by being able to stay on their parents’ health plans until age 26.

The law also put a ban on lifetime benefit limits, ensuring that patients can use their insurance coverage when they are sick and need it most. In addition, millions of Americans now receive coverage through their private health insurance plan for many preventive services without cost sharing such as copays or deductibles, including colonoscopy screenings, Pap smears and mammograms for women, well child visits, and flu shots for all children and adults.

Medical Loss Ratio: The Affordable Care Act increases healthcare efficiency by requiring insurance plans to spend at least 80 percent of collected premium revenue on health care benefits or quality improving activities annually. Insurers must inform consumers of their compliance with the medical loss ratio and issue rebates to consumers if they do not meet the requirement. The first round of rebates was issued in August 2012 for the prior reporting year, when consumers nationwide received rebates totaling $1.1 billion. In 2013, consumers received an additional $500 million in rebates due to the medical loss ratio.

Insurance Premium Rate Review: Insurers must submit to relevant state offices or the Secretary a justification for any premium increase greater than ten percent prior to implementation of the increase. To date, state and national premium rate review programs have saved consumers billions through both state denials of rate increases as well as encouraging lower premiums industry-wide. In 2012 alone, this process saved consumers approximately $1.2 billion.

Through the end of 2013, HHS has awarded over $250 million to states, territories and the District of Columbia to support their premium rate review programs. These grants support the hiring of new staff, improved communication with consumers about rate review, and the enhancement of existing infrastructure required to operate an effective rate review program.
Back to top

Pre Existing Condition Insurance Plan (PCIP) Program: As a bridge to 2014, when insurance companies are banned from discriminating against all Americans because of a pre-existing condition, the Affordable Care Act created a new, temporary program designed to help Americans who were locked out of the insurance market due to their health status. CMS established the PCIP Program as a temporary high-risk health insurance program to make health coverage available and more affordable to uninsured individuals who were denied health insurance because of a pre-existing condition. This temporary program was launched on July 1, 2010, just 90 days after the law’s enactment, and helped over 130,000 people, many with serious medical conditions, access the health care they needed but have been unable to afford without health insurance.

Experience from the PCIP program showed that enrollees had some of the most expensive medical conditions. The average cost per enrollee in 2013 was $23,989 per year, and in one year, four percent of PCIP enrollees accounted for over 50 percent of costs. Individuals incurring high annual costs tended to present with multiple, complex diagnoses, including cancer, heart disease, and degenerative bone diseases. These individuals now have access to affordable insurance coverage through the Marketplaces.

While the program ended on December 31, 2013, remaining balances in the PCIP account have been used to provide bridge coverage to enrollees.

Congress appropriated $5 billion for this temporary program between 2010 and 2014. ERRP has provided reimbursements to 2,850 plan sponsors spanning every state in the nation to help over 5 million early retirees maintain coverage. Both large and small plan sponsors benefited from the program, with one third of participating plans receiving $100,000 or less in total reinsurance payments from ERRP.

On January 1, 2014, while other ACA related private insurance provisions were fully implemented, ERRP sunset and no longer paid out reimbursements to plan sponsors. The remaining mandatory outlays for ERRP in FY 2014 and 2015 will be used to finalize audits and other program integrity activities.

Consumer Operated and Oriented Plans (CO-OPs): The CO-OP loan program fosters the creation of new, private, nonprofit, member-governed health insurance plans. The Affordable Care Act required that any profits the CO-OP makes must be used to lower premiums, improve benefits, or improve the quality of health care delivered to plan members. CO-OPs will contribute to the success of the Marketplaces by increasing competition in state insurance markets and by offering more choices to consumers.

Currently, 23 CO-OP loan recipients are licensed and offering health plans in 23 states. In 22 of those states, the CO-OP loan recipients offer coverage both inside and outside of the new Marketplaces. In addition, CMS approved 3 CO-OP loan recipients to expand operations into additional states starting in 2015. Loan awards as of December 31, 2013 total $2.1 billion. The program helps foster competition in states like Maine, where the CO-OP is one of only two issuers offering plans on the Marketplace, and offers the lowest cost plans in almost all metal categories. A McKinsey and Company report examining new entrants to the Marketplaces determined that in the states with a CO-OP, 37 percent of the lowest-priced plans are offered by CO-OPs.

Each of the CO-OP awardees underwent a thorough application review loan negotiation process. Loans were made only to entities demonstrating a high probability of financial viability. CMS closely monitors CO-OPs to ensure they are meeting program goals and will be able to repay loans.

Premium Stabilization Programs: The Affordable Care Act included two temporary and one permanent program to mitigate volatility of insurance premiums in the individual and small group markets beginning in 2014 when Marketplaces and new market rules take effect. The transitional reinsurance program provides protection to plans in the individual market when enrollees experience high claims costs for plan years 2014 through 2016. The temporary risk corridors program protects qualified health plans from uncertainty in rate setting from 2014 through 2016 through shared risk in losses and gains. The permanent risk adjustment program transfers funds from plans with relatively lower risk enrollees to plans with relatively higher risk enrollees to protect against potential effects of adverse selection inside and outside the Marketplaces. The Notice of Benefit and Payment Parameters published each year outlines specifications for these programs, and transfers resulting from these programs first occur in FY 2015 for the 2014 plan year.

Accelerate Issuance of State Innovation Waivers: This proposal allows states to develop innovative strategies to ensure their residents have access to high-quality, affordable health insurance effective in 2015, two years earlier than is currently permitted under section 1332 of the Affordable Care Act. As under current law, these strategies must provide affordable insurance coverage to at least as many residents within a given state as would have been provided without the waiver and must not increase the federal deficit. [No budget impact]