Everyone ages 18 and older should get a booster shot. Learn more

1/ The score reflects the impact on CHIP only. See Medicaid chapter for Medicaid impact.

The Balanced Budget Act (BBA) of 1997 (P.L. 105 33) created the Children's Health Insurance Program (CHIP) under Title XXI of the Social Security Act. The BBA appropriated almost $40 billion in mandatory funding to the program over 10 years from FY 1998 through FY 2007. The program was extended by the Medicare, Medicaid, and SCHIP Extension Act of 2007 (P.L. 110 173) through March 2009 with supplemental appropriations for states experiencing funding shortfalls in FY 2009. The Children’s Health Insurance Program Reauthorization Act (CHIPRA) of 2009 (P.L. 111 3) reauthorized CHIP, providing an additional $44 billion in funding through FY 2013 and creating several new initiatives to improve and increase enrollment in the program. The Affordable Care Act (P.L. 111 148 and P.L. 111 152) extended funding for CHIP through FY 2015.

HEALTH REFORM -- Increasing Enrollment of Eligible Children
CMS’s goal is to improve availability and accessibility of health insurance coverage by increasing enrollment of eligible children in CHIP and Medicaid.

CHIP is a partnership between the federal government and states and territories to help provide low income children with the health insurance coverage they need. The program improves access to health care and the quality of life for millions of vulnerable children under 19 years of age. In general, CHIP reaches children whose families have incomes too high to qualify for Medicaid, but too low to afford private health insurance.

States with an approved CHIP plan are eligible to receive an enhanced federal matching rate, which ranges from 65 to 85 percent of total costs for child health care services and program administration, drawn from a capped allotment. Since September 1999, every state, the District of Columbia, and all five territories have approved CHIP plans.

States have a high degree of flexibility in designing their programs. They can implement CHIP by expanding Medicaid, creating a separate program, or a combination of both approaches. As of January 1, 2014, there were 13 Medicaid expansion programs, 15 separate programs, and 28 combination programs among the states, District of Columbia, and territories. 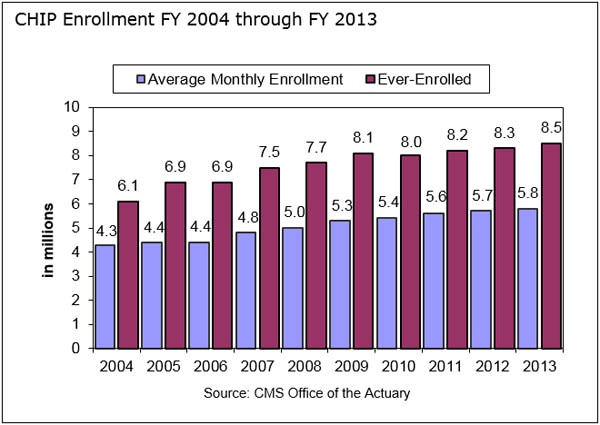 In FY 2013, the CMS Office of the Actuary estimated that 8.5 million individuals received health insurance funded through CHIP allotments at some point during the year, an increase of 2 percent over FY 2012.

Funding for CHIP allotments to states increased under CHIPRA by $44 billion over the baseline for 5 years (FY 2009–FY 2013). The Affordable Care Act extended funding for CHIP by providing $19.1 billion for FY 2014 CHIP allotments and $21.1 billion for FY 2015 CHIP allotments. This expansion allowed for better funding predictability at the state level. A Child Enrollment Contingency Fund was established for states that predict a funding shortfall based on higher than expected enrollment. The contingency fund received an initial appropriation of $2.1 billion in FY 2009 and is invested in interest bearing securities of the United States.

PROGRAM HIGHLIGHT -- Performance Bonus Payments
In December 2013, CMS awarded $307 million to 23 states that made significant improvement in enrolling children in the Medicaid and CHIP programs in FY 2013.

To qualify for a bonus payment, states must perform 5 of 8 specific enrollment and retention activities set out in CHIPRA. The authority to make payments for FY 2013 performance expired in FY 2014 and the Budget supports an extension of the fund through FY 2015, supporting one more year of payments for performance in FY 2014.

Financing: In addition to extending funding for state allotments through FY 2015, the Affordable Care Act increased each state’s enhanced federal match rate by 23 percentage points, not to exceed a total match rate of 100 percent, between FY 2016 and FY 2019.

Enrollment and Retention Outreach: The Affordable Care Act also increased funding originally provided in CHIPRA for grants and a national campaign to improve outreach and enrollment from $100 million to $140 million and extended its availability through FY 2015. Of this amount, 10 percent is set aside for a national enrollment campaign, and an additional 10 percent is set aside to increase enrollment of Native Americans and Alaska Natives. In FY 2011, $40 million in grants were awarded with a renewed focus on advancing coverage among the hardest to reach children, and in FY 2013 an additional $32 million was awarded. In FY 2014, CMS plans to award an additional $4 million in grants to continue outreach efforts to children who are American Indian/Alaska Natives, following up on $10 million in grants awarded for outreach and enrollment of American Indian/Alaska Natives in FY 2009. These grants support the Secretary’s “Connecting Kids to Coverage Challenge,” calling on leaders at every level of government and the private sector to find and enroll the nearly five million uninsured children who are eligible for Medicaid and CHIP. Outlay totals for Outreach and Enrollment Grants are reflected in the State Grants and Demonstrations chapter.

Improving Quality: CHIPRA provided $225 million over 5 years for activities that improve child health quality in Medicaid and CHIP, and in FY 2013, 18 states (across 10 grants) continued CHIPRA Quality Demonstrations to test ways to strengthen the quality of and access to children’s health care through a variety of health care delivery and measurement approaches at both the provider and patient levels. Other CHIPRA related CMS activities included providing significant technical assistance to states on child health quality measures, partnering with the Agency for Healthcare Research and Quality to administer grants to seven Centers of Excellence in Pediatric Quality Measures, conducting a quality improvement learning series for state Medicaid staff, and working with the Office of the National Coordinator for Health Information Technology to develop children’s health care quality measures and to electronically specify the Children’s Core Set measures. On December 19, 2013, CMS released 2014 updates to the Child and Adult Core Health Care Quality Measurement Sets, available at: http://medicaid.gov/Federal-Policy-Guidance/Downloads/CIB-12-19-13.pdf.

Permanently Extend Express Lane Eligibility for Children: The authority to operate Express Lane Eligibility expires at the end of FY 2014, and the Budget supports an extension of this tool to aid states in furthering their efforts to enroll Medicaid and CHIP eligible children. See the Medicaid chapter for additional information on this proposal. [$1.1 billion including $345 million in CHIP costs over 10 years]

Extend the CHIP Performance Bonus Fund: The Administration remains committed to providing affordable, comprehensive coverage for children covered by CHIP, and the Budget proposes to extend the CHIP performance bonus fund in anticipation of working with Congress to ensure their coverage. The last bonus payment for enrollment performance during FY 2013 was made in December of 2013. The Budget supports a one year extension of payments made for enrollment gains in FY 2014 as well as new programmatic requirements for states to qualify for payment.

1/ The score reflects the impact on CHIP only. See Medicaid Chapter for Medicaid Impact.

2/ There are a number of Medicaid and Program Integrity legislative proposals that have a non-budgetary impact on the CHIP program.