Find infant formula resources for your family during the voluntary recall.

The Administration for Children and Families promotes the economic and social wellbeing of children, youth, families, and communities, focusing particular attention on vulnerable populations such as children in low income families, refugees, and Native Americans.

(including those financed with Mandatory Funds)

The FY 2015 discretionary request for the Administration for Children and Families (ACF) is
$17 billion, a decrease of $637 million below FY 2014. The Budget advances high quality care for infants and toddlers as part of the President’s plan to help prepare America’s children for success in life by expanding access to early education. Additional investments are also included for programs that serve our nation’s most vulnerable children and families, including unaccompanied alien children, victims of domestic trafficking, and runaway and homeless youth.

As the President stated in his State of the Union address, research shows that one of the best investments we can make in a child’s life is high quality early education. These programs can help level the playing field for children from lower income families in vocabulary, and social and emotional development, while helping students to stay on track in the early grades. In FY 2015, the President renews his call for a series of investments that will create a continuum of high quality early learning services for children beginning at birth through age five. This initiative would help states provide high quality preschool for four year olds in low and moderate income families through a partnership with the Department of Education, expand access to high quality care for infants and toddlers through HHS’ Early Head Start – Child Care Partnerships, and expand current federal investments in voluntary, evidenced-based home visiting programs.

Head Start in the Opportunity, Growth, and Security Initiative
As part of the FY 2015 Budget, the President has asked Congress to further expand Early Head Start – Child Care Partnerships. This $800 million investment would bring total funding for Early Head Start – Child Care Partnerships to $1.5 billion in FY 2015 and provide access to high quality infant and toddler care to more than 100,000 children. Additional resources are also provided in this initiative to support Head Start grantees that are expanding program duration and investing in teacher quality.

Early Head Start – Child Care Partnerships: The Budget requests $650 million, an increase of $150 million above FY 2014, to support and expand Early Head Start – Child Care Partnerships. This funding will assist communities in increasing access to early learning programs that meet the highest standards of quality for infants and toddlers. Building off of initial funding provided in FY 2014, funds will be competitively awarded to new and existing Early Head Start programs that partner with child care providers that serve lower income children, especially those receiving federal child care subsidies. Through these partnerships, Early Head Start programs and child care providers will work together to provide high quality full day services that offer comprehensive supports to meet the needs of working families, and prepare children for preschool, in a variety of settings.

Head Start: In addition to expanding Early Head Start Child Care Partnerships, the FY 2015 request includes an additional $120 million to strengthen services for children by Head Start. In FY 2015, ACF will continue to require grantees who do not meet rigorous quality benchmarks to compete for ongoing federal funding. The Budget includes $25 million, the same as FY 2014, to support the transition between incumbent and new grantees through this process, minimizing the potential for service disruptions for children.

Of the $2.4 billion available in discretionary funds for child care,$200 million is targeted to help states raise the bar on quality by developing higher health and safety standards, improving monitoring, increasing provider quality through evidence based professional development, and improving access to information for parents choosing a child care provider.

ACF anticipates 70,000 refugee arrivals in FY 2015, together with 55,000 asylees and other entrants eligible for refugee benefits. These benefits consist primarily of time limited cash and medical assistance but also include social services, primarily job training and English instruction, so adults can become self sufficient as quickly as possible. With the implementation of the Affordable Care Act, HHS anticipates decreased refugee medical assistance costs as more refugees are covered by the Medicaid expansion in participating states. ACF has worked with the Centers for Medicare & Medicaid Services to translate the enrollment application into languages most often spoken by refugees (11 are currently available) and has developed a training curriculum so that Navigators and Certified Application Counselors can ensure that refugees and other entrants have equal access to benefits under the Affordable Care Act. The Budget includes sufficient funds to provide eight months of cash and medical assistance to these arrivals and maintain funding for social services and victims of torture.

By law, ACF takes custody of all UAC who file claims to remain in the United States under immigration law. These children reside in state licensed shelter facilities until ACF can place them with sponsors, usually parents or other relatives. The annual number of arriving UAC has increased from 6,560 in FY 2011 to an estimated 60,000 in FY 2014. Reasons for this increase are complex but a key factor is the rising levels of violence in Central America, the place of origin for most UAC. 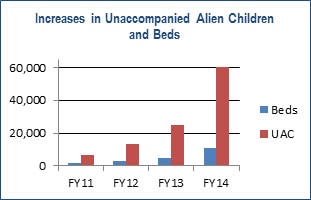 ACF has streamlined its placement process, reducing the average amount of time unaccompanied alien children spend in shelters. Through these and other measures, ACF is able to accommodate a 53,000 annual increase in UAC with a 9,000 seasonal increase in shelter beds. Despite these efforts, total UAC costs have increased significantly due to the rising number of UAC.

As directed by Congress, ACF is meeting with other government agencies – this has included the Departments of Homeland Security, State, and Justice – in an effort to better understand the reasons for the increase in the number of UAC arrivals and develop strategies for managing rising UAC costs. Due to the volatile nature of this program and ongoing discussions of a long term policy solution, the Administration is not able to reliably predict the number of UAC who will arrive in FY 2015 at this time. The FY 2015 Budget request for the UAC program is therefore $868 million, the same as FY 2014.

Victims of Human Trafficking:ACF is a partner in the fight against international human trafficking, identifying foreign born persons victimized in the United States and making them eligible for the same federal benefits and services provided to refugees. The budget includes an increase of $8 million to expand services for domestic victims of human trafficking. Funds will be competitively awarded to organizations working with at risk populations, including runaway and homeless youth and victims of domestic and other forms of interpersonal violence, and used to identify victims and provide them with intensive case management, including coordination of services and public befits to meet their comprehensive needs. Funds will also be used for demonstrations to provide transitional and longterm housing for young trafficking victims who cannot be reunited with their parents and to expand the hotline operated by the National Human Trafficking Resource Center.

Runaway and Homeless Youth:To support the President’s Opening Doors: Federal Strategic Plan to Prevent and End Homelessness, the Budget requests an additional $2 million to develop national data on the number of homeless youth and an improved understanding of the needs of runaway and homeless youth. The information collected through this national effort will help HHS to more effectively prevent and address youth homelessness.

Family Violence Prevention: The Budget includes $140 million, an increase of $1.5 million, for Family Violence Prevention and Services programs to help address the unmet shelter services need for victims of intimate partner violence. These programs are the primary federal funding stream dedicated to the support of domestic violence shelters and services for victims of domestic violence and their children.

Low Income Home Energy Assistance Program (LIHEAP): The Budget includes $2.8 billion for LIHEAP, which represents a difficult decision in a challenging budget environment. Included in this request is $2.5 billion in formula grants, distributed to states using the same allocation Congress enacted in FY 2014, and a $200 million contingency fund to respond to emergencies such as extreme weather and spikes in fuel prices.

The Administration’s LIHEAP request also includes $50 million for competitive grants to support replacement of inefficient home heating systems and other energy conservation measures that reduce home energy burdens. LIHEAP households typically spend a higher portion of their income on heating and cooling, in part because their homes tend to have older and less efficient heating systems, which are more likely to rely on more expensive fuels such as oil and propane. In some cases, the inefficiency of these heating systems makes replacing them a cost effective use of LIHEAP funds that can improve the impact of future LIHEAP funding. Grants will be awarded to states that analyze local conditions and design evidence informed projects to reduce the energy burden of LIHEAP eligible households by increasing the energy efficiency of their homes.

In addition, the Administration will continue companion efforts to increase energy efficiency and reduce costs. Through the Department of Energy (DOE) and the Department of Housing and Urban Development, more than 1.2 million housing units, including many low income homes, have already received weatherization assistance during this Administration. The Administration is seeking to increase support for energy efficiency retrofits for low-income households by providing $227 million for DOE’s Weatherization Assistance Program in FY 2015.

Native Americans:As part of ACF efforts to strengthen vulnerable communities, the Administration for Native Americans funds community designed projects for tribes and native organizations including American Indians, Alaska Natives, Native Hawaiians, and other Pacific Islanders. Funds are used primarily for local economic development but also for preservation of Native language and of local natural resources. Successful grantees have used this funding to provide job training, business startup and expansion, development of local industry, financial literacy, home ownership, and the preservation local culture. The Budget includes $47 million for the Administration for Native Americans, the same as FY 2014.

Community Services Programs: The Budget includes $350 million for the Community Services Block Grant, and supports the President’s priority to build ladders of opportunity into the middle class and promote economic mobility by proposing to target funds to high performing and innovative grantees that successfully meet community needs, and suspend funding in instances of fraud and abuse. Funding is not requested for the Rural Community Facilities program or the Community Economic Development program. However, ACF will continue to collaborate on the Healthy Food Financing Initiative with the Department of Treasury, where a commensurate increase in funding has been requested, and with the Department of Agriculture, which now has the authority to support this initiative.

ACF strives to utilize program evaluation to ensure that its programs are effective and to continually improve program implementation. The Budget includes $15 million, an increase of $9 million over FY 2014, for social services research and demonstration activities. This additional funding provides $6 million to continue support for the National Survey of Child and Adolescent Well Being, which provides critical information that is foundational to ACF’s efforts to improve the social and emotional welfare of children in and out of foster care. The remaining $3 million is requested to help identify the features of early care and education that are most important in supporting early childhood development.

Federal Administration:The Budget includes $206 million, $7 million above FY 2014, for the administration of most ACF programs including pay and benefits for staff and operation of agency office space. Additional funds are requested for the consolidation of ACF’s headquarters staff in Washington, DC, and moves of four regional offices across the United States. Move costs include reconfiguration of existing space to meet agency needs and reinstallation of agency information technology systems. These moves are part of government wide efforts to reduce long-term rent and utility costs by reducing per person space use and, in some cases, moving from private to government owned space.