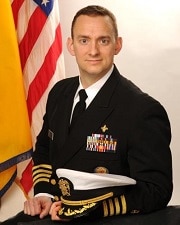 HHS Office of the Secretary

Prior to his work in ONS, Michael was the Director of the Office of Pandemics and Emerging Threats (PET) within the Office of Global Affairs at HHS. PET supports the Department’s Secretary, Assistant Secretary for Global Affairs, and HHS’ agencies and divisions in three international areas: Global Health Security, Antimicrobial Resistance, and Pandemics and Emerging Threats. He also deployed twice to Liberia where he helped to set up the Monrovia Medical Unit (a 25-bed Ebola Treatment Unit designed for patients who are healthcare workers).

Preceding his time with HHS/OGA/PET, Michael had as the HHS/ASPR Senior Advisor and representative to the Department of Defense’s U.S. Southern Command (USSOUTHCOM), covering 31 countries and 10 territories in Latin America. His activities there focused on global health security issues relating to national security, countering terrorism, pandemic and other emerging threats, and public health capacity building activities with partner nations.

Before USSOUTHCOM, Michael was the Deputy Director for the Centers for Disease Control and Prevention (CDC) Central America and Panama Regional Office in Guatemala; he also simultaneously served as acting regional director for six months. Programs in the eight countries included Global Disease Detection, Influenza, and All Hazards Preparedness and Response.

Before Guatemala, Michael was Interim Director for the CDC Central Asia Regional Office in Almaty, Kazakhstan. He worked with the five countries in the office’s geographic responsibility on programs that included DoD/Defense Threat Reduction Agency’s (DTRA) Cooperative Threat Reduction, Influenza, and All Hazards Preparedness & Response. Prior to serving as Interim Director, Michael was the Regional Deputy Director. Before this assignment, he had served in several domestic-related positions within the U.S. Government as well as institutes of higher education.

CAPT Schmoyer completed his PhD in Health Behavior at the University of Florida. He earned his BS (double major in Physical Education and Health Science) and MS (Community Health) from SUNY College at Brockport. Michael has had training in several languages and has participated in martial arts throughout his life.