The governments of the Brazil, Egypt, Hungary, Indonesia, Uganda and the United States cosponsored a virtual October 22, 2020 gathering in Washington, D.C. for a multinational ceremonial signing of the Geneva Consensus Declaration (so-called because it was intended to occur in Geneva before the live meeting of the World Health Assembly was postponed due to COVID-19). This Declaration further strengthens the coalition to achieve these four pillars: (1) better health for women, (2) the preservation of human life, (3) strengthening of family as the foundational unit of society, and (4) protecting every nation's national sovereignty in global politics. For example, it is the sovereign right of every nation to make their own laws in regard to abortion, absent external pressure.

We believe that finding genuine solutions to health concerns should be a priority uniting Member States. This Declaration charts a positive way forward for accelerating progress on achieving this end.

Promoting Women's Health Around the World. Together we are stronger.

Geneva Consensus Declaration – Together We Are Stronger 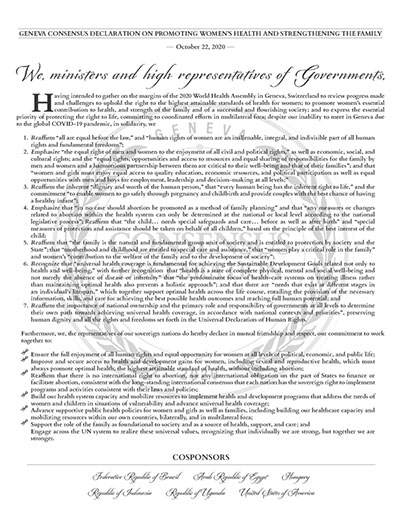 Translations of the Declaration in Different Languages

The following 35 countries signed the Geneva Consensus Declaration on October 22, 2020, representing over 1.6 billion people and every region of the world.

Note: Those countries in bold are the Declaration leading co-sponsors.

The virtual international ceremonial signing of the Geneva Consensus Declaration, cohosted by Secretaries Alex Azar and Mike Pompeo and cosponsored by the governments of Brazil, Egypt, Hungary, Indonesia, Uganda, and the United States was held on October 22 at 11 am EST. The Geneva Consensus Declaration strengthens the resolve to achieve these four pillars: (1) better health for women, (2) the preservation of human life, (3) strengthening of the family as the foundational unit of society, and (4) protecting every nation's national sovereignty in global politics. This event charts a positive way forward for accelerating progress and will be a celebration of partnership between the many countries gathered.

Sec. Azar and Sec. Pompeo talk about the importance of the Geneva Consensus Declaration and its ceremonial signing on October 22, 2020

* People using assistive technology may not be able to fully access information in this file. For assistance, please contact jointstatement@hhs.gov.